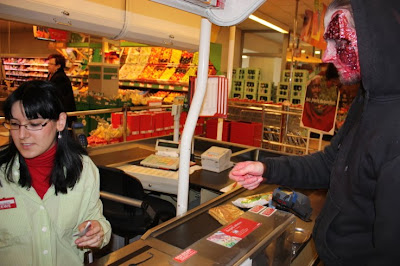 
I was trying to decide between the healthy bran cereal or the one with the little multi-colored marshmallows when I heard a scream to my left. I looked down the aisle only to see a horrifying sight. Mike, the friendly butcher who always labeled my ground beef wrong so I could save a couple bucks, was walking towards me covered in blood-his blood.

"Help me!" Mike held up his left hand towards me wrapped in a blood soaked cloth. I grabbed him around the waist as he leaned into me. We walked towards the front of the store leaving a trail of blood in the cereal aisle behind us.

"What happened?" the cute cashier asked us as Mike fell across the conveyor belt of her register. I helped him up a little further and had him lie down on the floor. 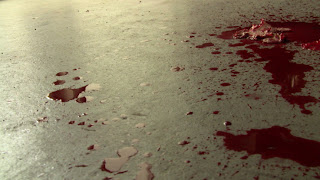 "It was dead, it was just a head...cow head...it bit...it bit me...look" Mike took the cloth off of his hand revealing three severed fingers. The fore, middle and ring finger on his left hand were gone from the knuckles up. By now mike was looking pretty pale. I could hear his breath was getting slower. The cashier ran to the office to get the manager.

I stayed with Mike as his eyes rolled back in his head and he stopped moving. A small crowd of mainly old women and stay at home moms had gathered around us making shocked expressions. The manager pushed his way through and knelt down next to the butcher. He put his head on his chest. Mike suddenly opened his eyes and grabbed the manager by the head, sinking his teeth into his face and ripping off his nose. He immediately swallowed the nose and sunk his teeth into the managers soft, fleshy cheek. The manager tried to get free but Mike had a firm grip on his head. The butcher continued to eat away at the managers face while the other customers and employees of my local grocery store ran for their lives and I watched stunned in disbelief. This was it. Zombies were no longer just stories or movies. They were here, in my town, in my grocery store, right in front of me.

The manager eventually stopped moving while Mike gnawed at the forehead of his skull trying to get to his brain. He didn't get to his brain before he turned and I was now faced with two Zombies. I quickly ran into the store towards the seasonal item aisle where I knew they had just stocked in heavy duty shovels for the upcoming snow storms. Mike had watched me move away and was now following not to far behind and the manger was following the sound of Mikes moans since he no longer had eyes to see.

A woman who had been shopping while listening to her iPod saw the bleeding, faceless manager and screamed. The manger locked in on this new and tasty noise, making a bee line for the woman who was within arms reach. She was almost completely turned around when the manger grabbed her arm and hair pulling her back into his mouth. He tore the flesh and muscle from her right shoulder. She tried to push him off and kicked him in the balls. He didn't notice and took another bite out of her neck, opening her jugular.

Meanwhile Mike was still locked on me. He followed me down the seasonal aisle where I already had a solid metal shovel in hand. Not the super wide kind, no, the smaller ones you use to spread salt. I raised it above my head once the zombie butcher was just close enough and let it come down right on his head. Good thing he wasn't much taller than me. His neck compressed down into his body, I heard a snap and his skull split. He was a fresh zombie so the wound began to bleed. He was thrown off balance by the blow and fell into the kid sleds on the right. I took this opportunity to bring my shovel down on his head several more times. Splitting his skull until the brain was visible and then I kept on hitting until his head looked more like smooshed lasagna than a human head. I was spent, swinging a shovel isn't easy and as my adrenaline decreased I realized how much energy I had actually exerted. I was tired...then I heard more moaning...
at 5:05 PM