Part IX - Imagine all the people 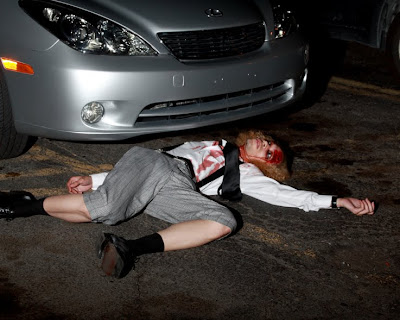 It was a four hour drive to Alex's mother's house. She lived in a wonderful house located on the edge of a state park. Her backyard was a gorgeous piece of untouched woodland that would remain that way as long as it's state park status didn't change. I didn't think there's a better place to go to get away from "civilization", short of a desert island somewhere.

Our drive out of town played out like one of the most bizarre music videos I had ever seen. As soon as we had successfully navigated past the small groups of zombies in the streets and out drove the faster zombies we came to one of the back roads we always loved to take instead of the highway. Not to mention we figured that staying of of major roadways was a safer bet. Usually I would make some comment about the smell of cow manure but I actually let the stench invade my nostrils happily. I was alive, I could smell and I was thankful for this. Alex reached over and grabbed the Ipod from the center console and passed it to me. I scrolled through the playlists and highlighted our usual car selection titled "Evie's car list".

John Lennon singing Imagine came on through the cars speakers as I looked out the window. Off in the near distance, a short way up in the field I saw four small groups of people. Each group was hunched over or kneeling on the ground moving erratically and semi frantically. I realized that these groups of people were eating the cows. They were tearing the mammals apart with their bare hands and teeth. Forcing large fists of cow hide, raw beef and muscle into their mouths.

"Imagine there's no heaven
It's easy if you try
No hell below us
Above us only sky
Imagine all the people
Living for today..."
I felt relatively safe in our Lexus as we drove past the different scenes of mayhem. After passing though the cow fields we drove past the old mall. I almost expected to see crowds of people in the huge parking lots, like in that George A. Romero movie" Dawn of the Dead". This wasn't the case. There were several cars fuse together in a very bed collision and dozen's of zombies walking around. None of which looked like they had an interest in the latest styles at JC Penny's or the huge sale going on at Kmart. They just walked aimlessly. Hunting for fresh meat to eat. The things that these people had been concerned with in their previous lives were gone. The only thing that mattered was finding another living human or animal, feeling it's pulse and then ripping it's insides out for dinner.
"Imagine there's no countries
It isn't hard to do
Nothing to kill or die for
And no religion too
Imagine all the people
Living life in peace..."
We passed several cars on the side of the road that had either crashed or were parked and abandoned. Some looked like mini butcher shops. Blood and pieces of people everywhere. I guessed that if a car were to transform into a blender, got turned on full blast, while the people were still in it, the result would look like what I was seeing. One car that was halfway in the road, sideways, held an interesting sight. A man and a woman, both zombies were still strapped in the front seats of their car by their seatbelts. As we drove around the front side of the car I got a good look inside. The woman had dried, caked blood in a dark waterfall from her mouth down her chin and onto the front of her shirt. The man was missing part of his upper right arm and shoulder. He must have been trying to drive them to safety not realizing she was in the process of turning into a zombie herself. Perhaps she was unconscious when he put her in the car. Then she woke up and had taken a chunk of his arm with her teeth. They both reached out for our car as we passed but neither could undo their seatbelts or get out of the car to chase us.
"You may say I'm a dreamer
But I'm not the only one
I hope someday you'll join us
And the world will be as one"
Another thing that amazed me was the amount of stuff some people had tied to the tops of their cars or the number of suitcases abandoned on the side of the road. Granted, I myself had packed a few things, I still couldn't understand why people would need so much stuff when they were trying to save their own lives. I mean, what's more important, your life or having the right pair of shoes to go with that matching shirt? Packing for survival is not the same as packing for a week vacation in Europe.
"Imagine no possessions
I wonder if you can
No need for greed or hunger
A brotherhood of man
Imagine all the people
Sharing all the world..."
The world had become a more primitive version of itself. Our lives, that had been focused for too long on the concept of "what I WANT" were now changed to the notion of "what I NEED". I wondered what was going on in war torn parts of the world. Were people still fighting each other while also fighting the undead? Did humans call a truce with each other and unite to fight the undead? I looked over at Evie who was fast asleep in her car seat. My mind began to drift off just as we pulled into Alex's mom's driveway. My daydream was cut short when Alex slammed on the brakes and I slammed my face into the passenger seat in front of me. Standing before our car was a strange, yet non grotesque, looking zombie. It had big red, curly hair and wore suspenders and a tie. It kind of looked like if Carrot Top had a kid with the Men in Black. Someone from behind the zombie yelled and it turned around. A shot rang out and the zombie hit the ground. We looked a little further down the driveway, closer to the house and there stood Alex's mom with a small revolver in her hand. She had shot the zombie square in the forehead and it never got back up.
"You may say I'm a dreamer
But I'm not the only one
I hope someday you'll join us
And the world will live as one"
at 9:55 PM