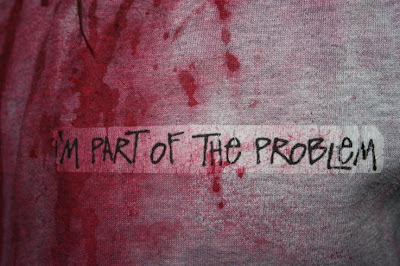 Their story left me sitting with my mouth gaping. I couldn't believe what they were telling me. I remembered the  crazy survivalist guy who had tried kidnapping me when this hell had started. Could the man they had just described to me be one of those people who finally lost all his marbles? Or was this man across town crazy from before and nobody had ever caught on, until now.

On the first day the man had been very hospitable and invited them into his house. He introduced himself as Frank but later said his name was Tom. They weren't sure if either was his real name. They noticed that all of the picture frames in the house were empty. Frank said he had taken the pictures of his family out of the frames after they died. He couldn't stand seeing their smiling faces day after day.

This seemed like an acceptable excuse to both Chris and Dennis for the empty frames on the walls and on the side tables. Other than that, and the boarded up windows on the inside, the place was cozy and comforting. Frank even shared his very well stocked pantry with them. As they sat in the golden yellow kitchen enjoying their pancakes with real maple syrup Frank asked them about where they were from and where they were headed. Dennis basically told his story leaving out that he was staying just across town and Chris just said he's been randomly traveling until he ran into Dennis.  Frank's face seemed to brighten up even more after hearing their stories. Dennis immediately picked up on the vibe and felt uneasy for the first time. Chris just thought the guy was happy to have living people for company again.

Frank was older but not too old. His hair was just starting to show signs of gray and his smile lines ran deep. He was tall and athletically built. He looked like he may have done a lot of exercising when the world was "normal". He wore jeans, a thick black leather belt with a Leatherman clipped onto it, military style boots and a tee shirt that read " Someone who loves me went to Jamaica and bought me this shirt".

Chris and Dennis slept in an upstairs room the first night. The room was painted pink with colorful flowers and two twin beds. Chris laid in bed looking at the happy flowers on the walls and right before he fell off to sleep he almost had the same feeling as when you first start tripping on mushrooms. His stomach lurched, his throat watered and he felt nauseous. His vision blurred ever so slightly and the flowers started dancing. What was happening?He tried to move his hands but couldn't. Was this death? He gave one last struggle before blacking out.

Dennis was in the other twin bed sweating. He knew something wasn't right before his stomach confirmed it. His legs were pins and needles as he got them over the side of the bed. He managed to glance over to Chris who looked sound asleep. Dennis stood up and then doubled over onto the floor. He tried to crawl bit landed on his face, hard. Something warm and wet  trickled down onto his lips. It tasted like hot, liquid metal. Blood. His nose was bleeding. As he laid on the floor he  stared at the light coming from under the bedroom door and the shadow of someone standing on the other side. Frank or Tom or whoever he was stood on the other side, waiting. Dennis understood now, he had been poisoned. Just as Dennis felt his eyelids start to close the door opened and Frank stepped in holding a hot cup of coffee. The steam from the little blue mug was visible and the smell of fresh coffee made Dennis throw up some of his pancakes.

" Now why did you have to try and get out of bed. You got yourself all bloody before your time...now I have to clean you up." Frank said as he stood between the two men passed out in this cute little girls room. Franks expression changed and he poured the hot coffee on Chris's exposed leg. Chris didn't even flinch.

"How dare you disgusting excuses for men touch my little girls! You fucking pedophiles. I'll teach you some fucking respect!" Frank yelled and then kicked Dennis in the stomach, a little more throw up came out of Dennis's mouth.

Hours later Dennis woke up. His feet and hands were bound with ropes. His stomach and ribs hurt like he had been punched an yet he had no idea why. Where was he? It smelled wet and the air was stale. There was also the smell of death. Not the smell of zombies, no, this was the smell of actual death. He could hear movement in the darkness.

There was a small window above his head. One corner was broken and uncovered, letting in a small beam of daylight. It was the only spot illuminated in the entire...wherever here was. Dennis squinted a caught a glimpse of a slender foot swipe at the light. It was a woman's foot and a woman's ankle. Of this much Dennis was certain.

"hello?" Dennis whispered in the direction of the leg. He heard another shuffle and the leg swiped again in his direction. Whomever the leg belonged to they couldn't speak back or move anything besides that one leg. It must have been near the end of the day because the light from the window was starting to turn deep orange and fade.

Dennis asked the leg to answer some questions, if she could, by shaking her foot. Shake once for yes and twice for no. The leg slowly came into the light. Her once well pedicured toes now had nothing but chipped red paint left. It made it look as though each toenail was individually and carefully chewed off. Looking raw with fresh blood but it was really just nail polish. The sole of the foot was dirty and scabbed. Her ankle was almost black from bruises. The battered foot came to a hesitant stop in the light and shook once... Yes.
at 2:08 PM