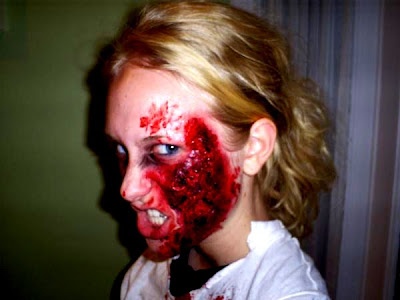 Alex, Dennis and Chris went out today to gather some more supplies from a couple different houses. Don had drawn a map to the houses he thought might yield the best and necessary stuff. Food was a high priority and toilet paper was right up there with it. It amazing how many little thing I took for granted when I could just go to the store and buy more.

I looked down at my bare feet and remembered how nice it was to get a pedicure and foot massage from a woman with small hands. Little luxuries like that could keep me daydreaming for hours if I let myself drift off. Evie was busy stacking her baby blocks when the men came in through the front door. They didn't look particularly worn or frightened and their packs looked full. They did, however, have very puzzled looks on their faces. This new expression had me even more worried than if they had walked in all sweaty and tired from a fierce battle.

They took off their shoes and stripped out of their blood stained clothing. As they put on clean shirts and pants I walked over carrying Evie and her stuffed bunny.

"It went good. We found more pasta and sauce, some organic canned vegetables, rice , diapers, dry beans, instant coffee, canned fruit, cereal, beer, tea, tuna, bleach, soap, lotion, toothpaste, and salad dressing. I also grabbed you some new clothes. Nothing fancy but at least they aren't stained with bleach yet. Dennis and Chris have some other things in their bags too. Overall, it was a good trip, thanks to Don's map. But we did see something weird on the other side of town and we've been trying to figure out what it is that we saw..." Alex's voice trailed off a little as I followed him into the kitchen. I put Evie down and she walked out into the Den where Chris was sorting his loot.

I reached over and started to help Alex put the food away in the cupboards. I waited patiently as he sorte out what he was going to tell me in his brain. This could only mean one thing. Whatever he was about to tell me that he saw could not be good. I looked down at the bag of pasta in my hand, medium size shells. I wish I had some extra sharp cheddar cheese because I could make a great mac'n cheese with the shells. I sighed as I sat the pasta up on the shelf next to the dry beans. Alex cleared his throat.

" We aren't the only ones alive in town." Alex finally blurted out.

"Really?! Who did you see?" My mind instantly thought of Melissa. What if she wasn't really dead and had found a way to come back into town. Alex must have read my thoughts and reassured me that it wasn't anybody we knew.

"It was some guy in a house on the other side of town. Not far from the Boisy house, where we found most of our loot. Dennis noticed him first and we hid out of sight and watched him. He looked like he was, maybe, a little older than me. Skinny with dark hair and he had on a dirty, bloody shirt and jeans. We knew he was alive because he was smoking a cigarette. He was sitting at a picnic table in his back yard drinking a beer and he had a blond woman zombie tied up in a chair next to him. She wouldn't stop trying to bite him and he would hit her across the face with a piece of wood every so often. As through he was swatting a fly with a fly swatter. One side of her face was bloody and missing most of the skin around the cheek area. We just watched in shock. After a while he got up and gagged her with a thick leather belt, put a bag over her head, untied her just long enough to get her into some other restraints and then he marched her back into the house. It was the most bizarre thing I have ever seen. We waited to see if he was going to come back out but he didn't. What the hell do you think he's doing over there? "

I looked at Alex and shrugged. I had no idea what the hell was going on across town but from the sounds of it I didn't like it one bit. Some guy was keeping a zombie "alive". For what purpose I couldn't and didn't want to imagine. Maybe it was his wife that he just couldn't let go of or maybe he was a pervert taking advantage of the fact that his victims couldn't fight back and the police didn't exist anymore. The fact that he was keeping a zombie captive disturbed me. Zombies were and are meant to be killed. Nothing good can come from keeping one of those damned things "alive". I asked Alex if he thought that the man could see the smoke from our chimney and he said no since the guy was on the other side of town. We finished putting the groceries away and went into the den. Evie was having a blast re-arranging the items Chris had nicely stacked on the floor in neat piles.
at 9:36 PM