Part V - It's not natural 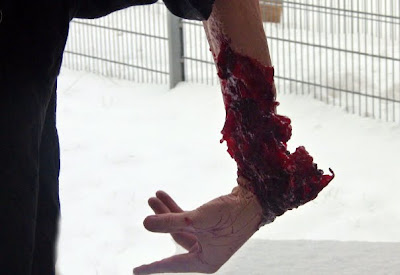 
LINK TO PART I - Time to check out

This has turned out to be one hell of a day. No pun intended. Just four more blocks and I'll be with my daughter Evie and her father, Alex. I wonder how he's holding up. He has never been very good under pressure or extreme circumstances. I look down the street towards my house with my shovel at the ready. I'm going to have to deal with the three shambling shapes I see ahead of me. I have to keep them in front of me and not get surrounded. So far I have been able to move faster than the Zombies I have come across. This is going to be like playing tag except the other players won't be running away from me and I'll be tagging them with the head of my shovel.

As I approach, slowly, I notice that these Zombies are in he worst shape I have seen yet. There are two men and one woman. The first one, closest to me is a young man whose left arm looks like it is barely attached by exposed muscle tissue. His jeans are torn in several places and there is almost no flesh left on his right calf. It looks like all of the meat has been chewed from his leg, right down to the bone. He wasn't facing me as I hit him in the back of the head, sending him to the ground. I impaled his skull with the tip of my shovel, splitting his skull and cutting into his brain. The commotion had attracted the attention of the other two zombies. The woman let out a low moan with her arms outreached towards me. The man followed close behind her. All I could think was that I needed to split them up a little more. But I couldn't see how.

Instead, dominoes falling came to mind.  I used their lack of balance against them. I ran directly at the woman, ramming my shovel into her chest. She then fell back into the Zombie man behind her knocking him to the ground. I pulled my shovel out of her chest and swung. The loud cracking noise of her skull being smashed was almost deafening. She fell to the ground and was still trying to claw her way towards me. I guess I hadn't damaged the brain. She lifted her head off of the ground and a huge section of her skull fell off. Her brain slipped out of her skull and hung off to the side, still attached by whatever it is that connects it to our spines. She saw it and bit into it. She began to eat her own brain!

I turned my attention to the other male Zombie while she committed Zombie suicide. He was just barely to his feet when I struck him down again, decapitating him and crushing his skull into his brain. I looked back and the woman Zombie, she had stopped moving. A good section of her brain was missing, partially chewed and hanging out of her gaping mouth. Wonder what it meant? She had eaten her own brain when it was in front of her but she hadn't tried to attack the other Zombies around her to eat their brains. Instead she just wanted to eat me. Well, I can't say I blame her. I like to eat hot pizza but if I'm hungry enough I'll eat cold pizza.

Only half a block to my house now and the coast looks clear. I open the front gate, my key in hand, ready to get inside the house as fast as I can. Before I can insert the key the front door swings open and Alex pulls me inside. He lets go of me as soon as he sees what I look like and the blood on his hand. I'm covered in splattered blood, sweat, skull fragments and dirt. I catch a glimpse of my reflection in the hallway mirror and strip down to my underwear on the spot. Alex runs to the kitchen and washes his hands with bleach while I grab my clothes and stick them into a garbage bag, tying it tight. The I take my turn washing my hands with bleach.

"She's napping upstairs. What the hell took you so long to get back here? I was going to leave as soon as Evie woke up. Why didn't you text me back or call me? You send me that horrible picture and then nothing. What was I suppose to think? Seriously, what..."

"Alex! Now is not the time to start with me. I had to deal with surviving on the way home. I'm sorry if I didn't have time to send you a text saying I was okay. I was too busy staying okay."

Alex follows me into the bathroom where I start a hot shower. I'm pretty sure I have pieces of people in my hair. Not to mention this may be the last time I may get the opportunity to take a hot shower for a while. He sits on the toilet while I climb into the tub. I let the hot water beat down on my face and run down my body. The water goes from a scarlet red, to a light pink, for a little, then runs clear. A shower has never felt this good before. Alex is saying something to me, might even be trying to argue with me. I have no idea. My ears are tuned out and my brain is running a mile a minute. I'm thinking about my daughter and our survival. I'm thinking about how all of this could have started and how it will all end. I'm thinking about life before today and how after today nothing will ever be the same.
at 6:51 PM