ONE OF OUR LOVELY WINNERS HERE AT Z.C.L. 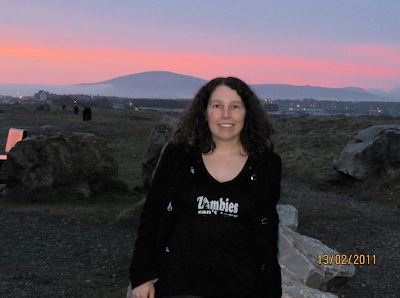 Meet Sarah. She named the newest character in the ongoing story here. The name she gave was Grace and Grace is about to reveal a very important secret... soon...

Sarah is from Cumbria, England and she is pictured here in the "Zombies Can't Love" tee shirt that she won.

The trailer for this video game is awesome. It's like a short movie in itself. If this had been done with real people I could imagine it getting into film festivals. Seriously, good work to the guys who made this!
at 11:40 AM No comments:

WIN A COPY OF "Pride and Prejudice and Zombies: Dreadfully Ever After" 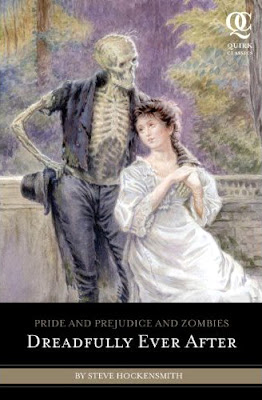 WIN A COPY OF "Pride and Prejudice and Zombies: Dreadfully Ever After"


The thrilling conclusion to the Pride & Prejudice & Zombies trilogy is due out on March 22nd 2011 but you can enter to win one of two copies here at Zombies Can't Love.


This hair-raising and heart-pounding story opens with our newly married protagonists, Elizabeth and Fitzwilliam Darcy, defending their village from an army of flesh-eating “unmentionables.” But the honeymoon has barely begun when poor Mr. Darcy is nipped by a rampaging dreadful.
Elizabeth knows the proper course of action is to promptly behead her husband (and then burn the corpse, just to be safe). But when she learns of a miracle antidote under development in London, she realizes there may be one last chance to save her true love—and for everyone to live happily ever after.


With the Pride & Prejudice & Zombies film on the way, it's hard not to be excited for the conclusion of the book series.


TO WIN YOU MUST DO THE FOLLOWING OR PREPARE TO BECOME ONE OF THE UNDEAD!!


Please have your entry in by midnight of March 18 2011. The two main winners will receive copies of the book and there will be one honorable mention who will receive a Zombies Can't Love tee shirt.


Winners will be announced on March 22nd 2011. The books and tee shirt will ship within 2-4 weeks after the winners are notified.


The winning pictures will be posted up on my blog.


THANK YOU TO ALL WHO WILL ENTER AND GOOD LUCK!!


if you have questions feel free to comment here and ask... Chante 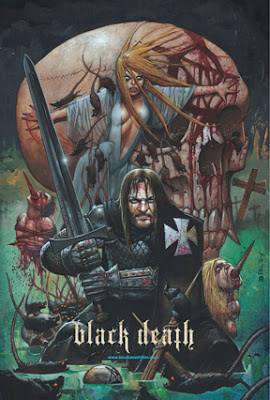 I recently had the pleasure of viewing “ Black Death” directed by Christopher Smith from  Magnet of Magnolia Pictures. I do mean pleasure because this film was original and I always enjoy when characters stay true to their natures. The film in itself stayed true and delivered an entertaining and pensive moment.
I feel that religion isn’t something that is of a high priority these days. People are more in tune with technology and what’s the latest thing going on in some semi-celebrity-reality-star’s life rather than whether or not they are going to heaven or hell. This film reminds us of how far we have come from the crusades and dark ages when the black plague was rampant.
Just as the title implies, the black plague or black death plays a role and a heavy backdrop to this surprisingly original film. It’s 1348 and a group of god abiding demon “bounty hunters” sent by the church take on, what they believe will be, a journey into hell to find a necromancer and do “god’s work”. They describe the necromancer as one who takes the dead from the cold, wet earth and breaths new life into them (creates zombies). A young monk volunteers to lead the bounty hunters to the village they are seeking the necromancer in. (Side note: Did you know that “Ring Around the Rosey” was a song about the black plague? Next time you see some kids singing it feel free to get creeped out - you’re welcome. ) Back to the film...
There is more than one plague in this film. There is the pestilence causing sickness and disease and then there is the plague of religion which is just as infectious and deadly. Another reoccuring theme is that of the zombie. There are women brought back from the dead, people reduced to nothing but walking dead while seeking vengeance and stories of cannibalism. While this isn’t a zombie movie by any generic definition of the genre I would include it in the category non the less.
If blood and heavy gore with people eating people is what you seek for a zombie movie...this isn’t the film for you. But if you would like a good story with more subtle definitions of a zombie. Every person in this movie is already a potential member of the dead walking. There is even the element, which all zombie movies have, a place that is free of infection and safe from harm - but for how long?  There are some good fight scenes and good torture/death scenes this may just be a great film for you to watch. Plus a generous amount of blood and gore without being over the top. I completely believed every character and the world in which they lived.
Overall, “Black Death” is a well written movie incorporating a bit of real history of how zombies were made, criticism of religion in all forms, the witch hunts of old, vengeance and the overall question of the solidity of a person’s faith.
Ulrich (Sean Bean- Lord of the Rings, Silent Hill) and Osmund (Eddie Redmayne - The Good Shepherd, The Other Boleyn Girl) gives great performances and I have to commend the director of photography, Sebastian Edschmind for his color palette and great job for creating the overall feel of this film.
RED BAND CLIP:
More Black Death Videos
at 10:38 AM 2 comments: