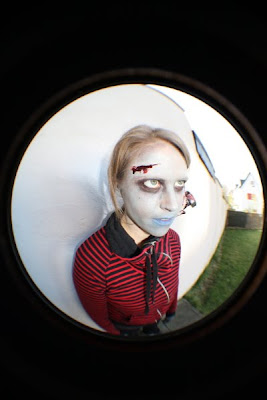 The next few days were a blur of zombie killing, digging, fire wood chopping, soaking clothes in bleach water and rain water gathering. Since the power went out we couldn't take showers anymore and had to heat the house with the fireplace at night.

We were a little scared at first about using the fireplace. We wondered if the undead might be attracted to the smoke. Melissa and Chris volunteered to test the theory by going to a neighbors yard and starting a fire outside one night and camping there. No zombies showed up and no living people showed up either. I have to admit, I think Chris might have a bit of a crush on Mel. Not sure of what she thinks. Other than her little smile, once in a while, she camouflages her emotions very well. She only talks about her life since the zombies showed up and avoids questions about her previous life.

She has proven to be a great asset in the past few days fighting the undead. Which show up in small groups everyday. They mostly come from the front road and shamble around the front yard. Although we have found a few towards the back of the house. We think those zombies came from the front street too, perhaps at night and just walked around back. We haven't seen any zombies come directly out of the woods.

We rotate in shifts: two outside fighting, two standing watch and two inside with Evie. This system has been working well. If one person fighting gets tired they can call to one of the people watching to take over. As long as we don't get an obscenely large group of undead brain eaters I think we will be okay on the war front.

Our pantry is another story entirely. It's beginning to get pretty bare and Doris's garden is a long ways off from having anything edible in it. Last night we talked about it and we are going to have to search the nearby houses for food and supplies. Chris and Melissa both had experience doing this so they volunteered immediately. Don, Alex and I drew straws. I pulled the short one. Besides leaving Evie, I actually didn't mind going.

Doris suggested we try the small blue house ten minutes down the road first. She had met them at a yard sale. They had a little boy around Evie's age and an older toddler so they would be the best bet to find baby food and baby gear. Don said, if we had time and energy, to go two houses down from there and investigate the garage next to a small brick house. His friend Erickson lived there and he was almost positive he kept a small gas generator in his garage. If it was there we might be able to figure out a way to get it to the house. Then he might be able to rig something up so we could take a shower or so Evie could watch her cartoons once in a while. I thought it was nice that despite the misery of our current situation Don was just trying to be a happy grandpa. He wanted his little grand daughter to still be able to wonder what happened to Nemo or Bugs Bunny.

The next morning Alex handed me my shovel as I walked out the door. He had spent the night sharpening the edge, making it even more deadly. I saw the blisters on his hands from doing this and thanked him for his hard work. He was a considerate and thoughtful guy, when he wanted to be. But I still felt a huge chip on my shoulder, that I wished would go away.

Mel, Chris and I each had empty backpacks Doris had given us.  We started walking down the driveway to the road. There wasn't a single bird chirping and the wind was silent. I could still smell the stench of decay and feces around us from all the previous zombies we had killed. This was despite the fact that  we had buried all of the bodies. Mel pulled the gun I had seen before out of her pack. I gave her a puzzling glance.

"I just like holding it...and it's easier to hit with than my fist." Melissa said.

I didn't reply and scanned the road. Nothing. It was like that Christmas carol, "not a creature was stirring, not even a mouse". Chris nudged me and we began walking. There would be no more talking between us until we got back home. We needed all of our senses on high alert if we wanted to make it home alive and human.
at 7:16 PM