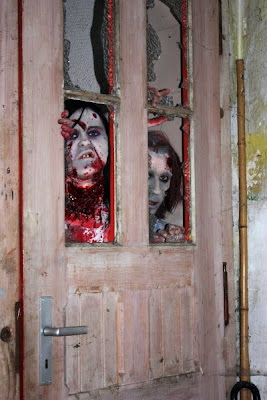 I picked up the tote bag and took the baby food jars out. I walked gingerly around the dead woman on the floor as I picked up the other scattered jars. I counted a good thirteen jars in total. Lucky thirteen for me. I could hear Mel searching the cabinets in the kitchen. She slammed one, out of frustration and went over to her shaking my finger like a any mother does silently, but willfully. Mel looked at me and said sorry bowing her a head a little. I suggested we check the rest of the house for anything else that may prove useful, while we were there. We listened again for a moment, not hearing anything,we split up. I went upstairs and Mel went into the basement.

The first room I came to must have been the parents room. It was neat except the bed was unmade. The closet doors were left open and I could see that some of the hangers were bare. More hangers then normal even of it had been laundry day. What struck me as odd was that all the drawers to the  two large dressers in the room were shut. Whoever had taken clothes from the closet couldn't close the door but took the time to shut the drawers. I walked over and opened one drawer. Ladies underwear stared back at me, silk and pretty, with a faint smell of cedar. I was about to close the drawer when I noticed the corner of a yellow box peaking out from under the panties. It was a box of baby organic baby cereal. Upon further investigation each drawer had been carefully packed with non perishable and dry food for babies an adults. Baby cereal, more jars of baby food, canned fruits, canned vegetables, powder creamer, sugar, crackers, jelly and other various things. I thought I was hallucinating. I pinched myself just to make sure, yup, the food was there.

Running downstairs I had to contain my happiness. I stuck me head out to check on Chris. He was scanning around in every direction.

"Psst, Chris, got food?" I asked, referencing the old "got milk" ads. He smiled and then said hurry up.

I retreated back into the house with my stomach growling louder than ever. Guess it knew food was nearby and wanted to make it's voice heard. I went to the basement door. I didn't hear anything. I gave a low whistle and Mel whistled back twice, meaning it was safe. When I got downstairs she was going through various boxes stacked on a shelf. The box she was rummaging in had the words "camping trip" scrolled across the side in black Sharpie marker.

" Not much sown here worth taking. The tents are all mildewed and the sleeping bags and stuff look like moths or bugs gr at them. I did find this solar powered lantern and a crank radio with a flashlight on the side." Mel pointed to the two object right by my feet at the bottom of the stairs.

"Well grab those and come upstairs with me. We have some packing to do, quickly."

Melissa followed me upstairs and almost seemed to faint when I opened the first drawer. Our stomachs growled at the same time and we giggled like a couple of school girls walking past the cute boy in the hallway. We were down right giddy. Looking in the closet I found two larger backpacks than why Doris had given us and we crammed them full of food. Our trip home was going to have to be extra cautious because with these bags we wouldn't be able to run very fast, if need be. While Mel finished packing I decided to investigate the bathroom and kids rooms. I stopped short when I saw the blood covered door at the end of the hallway marked Kaitlyn & Brandon. Now I knew their names and I wasn't happy about that. I also wasn't happy that this was the only door closed and covered with bloody hand prints and smears.

I approached cautiously and tapped on the door with my foot. Nothing. I tapped again, a little louder, still nothing. I reached into the open bathroom and grabbed a wash cloth hanging from the rack to turn the doorknob with. I didn't want to get my batting gloves dirty, after all. I tried to prepare myself for what I might find. My worst fear was that I would open the door and find pieces of a baby, whose future had been wide open, strewn all over the floor. Instead I found a cute, clean children's room. A crib stood in one corner and a car shaped bed in the other. I guess the little girl wasn't into girly stuff or just really liked race cars. The window was wide open and a ladder leaned against it. This must have been the family's escape route. Good thing zombies can't use doorknobs. This time I was genuinely happy thinking that little Kaitlyn and Brandon might be safe somewhere far from here. I scooped up some of the remaining clothing in Evie's size and bigger. Just because the world had gone to hell didn't mean Evie would stop growing up. Who knows, maybe Evie might meet Kaitlyn and Brandon one day and play hop scotch or color together...

"Jamie? Jamie? What are you doing?" Melissa was standing behind me. I was standing in the middle of the room holding a Teddy bear and a large diaper bag full of clothes. I came back from my day dream and said nothing.

"Let's let Chris in here and then get the hell out of dodge."

Chris's eyes widened when he saw us come out of the house with two huge camping backpacks full to the brim, the smaller backpacks full on our chests and me with a packed diaper bag.

" Actually yes, this store is fabulous, even had a great lingerie  section." Melissa winked at Chris. I don't think I was suppose to hear that, so I acted like I hadn't.

Chris went inside the house and came out shortly after with his back pack full and a medium size gym bag. He carried the solar lantern and Mel carried the crank radio. Chris had snagged some extra guys clothing for him and the guys. It would be nice for them to have some stuff to wear that didn't smell like bleach. I was looking forward to changing into clean clothes myself.

The walk home was very slow going. We saw a few zombies here and there. We managd to avoid them or go undetected. There was one house that had two zombies staring out the broken window panes of a door. They didn't moan or growl because their throats were gone. Another house we passed sounded like it was full of zombies and somebody screamed. I felt weak and helpless. There was nothing we could do. We had our own survival to think of. Whatever was going on in that house wasn't worth us not making it home. Helping others in this zombie infested world wasn't a matter of valuing human life. It was a matter of how much you valued your own life.
at 3:06 PM