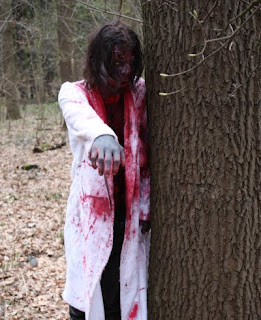 In the car we were all a little shaken from the abrupt stop and now fascinated by the older woman pointing a gun in our direction. Alex was the first one to move, I was second and Chris stayed immobilized. Before getting out Alex looked around in every direction. The same way a driver trying to escape the round-a-bout around the Arc de Triomphe in Paris will check for oncoming traffic.

"Mom! Where's dad?" Alex said as he stood within the driver side doorway.

"Don't worry he's inside napping. Hurry, help me move the body and let's get you inside. Where's Evie? Where's Jamie?"

I glanced around outside in every direction I could see, grabbed my shovel and got out. Then I unclasped Evie's carseat from it's quick release base, shut the car door an headed quickly towards the house. Evie had slept most of he car ride and I hoped this wouldn't mean she would be up all night because I could really use some sleep after the day I've had.

Alex's mom, Doris, I gave her a quick kiss on the cheek as I passed her and went into the house. She gave me a smile in return as she slipped on a pair of yellow dishwasher gloves. The house was warm and inviting. An instant feeling of safety fell over me as I closed the heavy front door behind me.

Outside, Alex was putting on a pair of work gloves his mother had handed him and they both moved the dead zombie quickly from the front of the Lexus. Chris stood next to them keeping a lookout with Faith. Once they had moved the body Alex briefly introduced Chris to his mother who then ushered him into the house. Alex turned the car around and backed it as close to the front porch as he could. He figured, this way, if they had to leave in a hurry he could just floor it and head straight down the long driveway.

Evie had woken up shortly after I got into the house. I was taking off her
coat when Doris and Chris walked in. Doris placed her yellow gloves on a high shelf next to the door and made a bee line for Evie. I barely got her arm out of her coat before she was whisked up by her grandmother and given the biggest hug ever. Chris and I took our jackets off and followed Doris into the den with our respective weapons. Alex came in shortly after.

Alex's father was napping in the big lounge chair next to the two over sized couches in the den. He stirred a bit and re-adjusted his glasses on his face. Once he got his bearings he stood up and gave his son a hug, then me and then took Evie from Doris and hugged her tightly. Evie struggled a little to get down and did her drunken toddler walk over to a basket full of toys on the floor. Doris introduced her husband to Chris and then she retreated to the kitchen as we all sat down.

If I didn't have a shovel directly behind where I was sitting on the couch and if Chris didn't have his trusty machete tucked safely from within Evie's reach, but still accessible, you might think we were just stopping by on a friendly family visit. Instead of gathering together in hopes of creating a greater percentage of survival for ourselves. Since starting my relationship with Alex over five years ago I had never seen his father, Don, get angry once. He was always pleasant with a lingering smell of pipe tobacco. He was also a great observer and problem solver.

"How was the ride up here? Did you see many of them? I'm so happy you finally made it. Doris and I were so worried about you and Evie, ever since this morning when Alex sent that horrific picture and I came back from my morning walk in the woods..." Don's voice trailed off a little as Doris entered the room with a tray of tea and cookies. You have to love grandmothers, they can always make the perfect food appear almost instantly in any situation. Hopefully I will get to achieve "grand-ma status" one day.

We each took a carefully decorated porcelain tea cup and saucer.

"I wasn't here when your mother got the picture, I was out back taking my morning walk through the woods. I was about an half an hour into my walk when I came across the strangest thing, a bear carcass...and human body parts...but there weren't any bodies. It looked like there had been a pretty intense battle, from what I could tell, but it didn't look like the bear had been the attacker...even though the hand and partial leg I saw did seen to have been clawed free from their owner...no...it just seemed apparent that the bear had been trying to defend itself. I can't explain it, call in instinct and ..trust me...at my age you learn that going with your gut feeling is most often your best bet. The poor black bear was almost like a rug, it had very little insides left, it's bones had been pulled out...it's under belly was ripped open..." Don paused as Doris picked Evie up off the floor and took her into another room.

"Don't worry about it Don, continue what you were saying." I replied and sipped my hot tea, burning the tip of my tongue. I hate when I do that.

"Well, like I was saying it's bones were pulled out and looked gnawed on, it's brain cavity was completely empty and there was caked brown blood everywhere. I knew it hadn't been killed too long ago since there weren't a huge amount of bugs or maggots yet. Needless to say I turned on my heels and headed straight back to the house...my heavy walking stick saved my life this morning...I was almost back to the house...it was in a bathrobe, I think...came at me from behind a tree...I swung...and swung...and swung. Like I said, instincts... By the time I got back to the house your mother was hysterical in the kitchen trying to reach you on the phone saying that you had sent her a picture, which she showed me, and was on the phone with you when the line went dead and that  she couldn't get through to you again but she thought you were heading here. After I told her what happened to me in the woods we shut the storm shutters on the house and have been taking turns napping and keeping watch till you got here...I'm so glad you made it here."

We told him the events of our day before we made it to their house. Alex described the zombie his mother had shot in the driveway and his dad said that it must have been the Topher's eldest kid from down the street. He had been an eccentric college type, into unusual music and clothing. He used to help him cut firewood when he was in high school to earn some extra cash. Now he was a dead zombie with a clean gunshot wound to the forehead rotting away behind some bushes in the front yard.

"Well, I guess you can't get more eccentric than that?" Don said flatly.

The statement was so unexpected that we all began laughing much harder than we probably should have been. It felt good to laugh and yet so foreign at the same time. I could hear a bath being started further down one of the hallways. Must be Evie's bath time.  I got up and let the boys talk. I stepped into the large guest bathroom and sat my shovel inside the doorway. I could see Doris had placed her revolver on the high window sill. We both had noticed each other's weapons and looked at Evie who was now busy sinking Winnie the Pooh under a mountain of bubbles. Neither one of us said much of anything as we watched Evie play with her tub toys and enjoy her bath.
at 9:13 PM