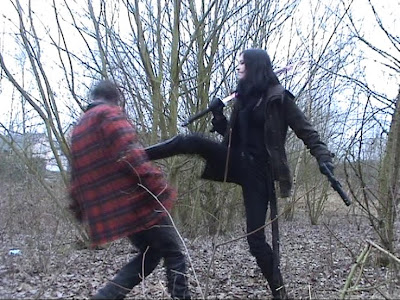 I was running in a dark tunnel. There were hands reaching out for me from every direction and the more I tried to scream the heavier my feet felt. I felt like the tunnel would never end and then I started to see a small point of light in the distance. I didn't dare look behind me. I could hear their unearthly growling and moaning. Just as I thought I would make it out I tripped. I tried to catch my fall and broke both of my hands. My voice was silent as I yelled out in pain. My wrists were like silly putty as I defended myself from the horde of hungry zombies descending upon my legs, my chest, my arms, my stomach, my face...

"WAKE UP JAMIE!!" Alex was shaking me in an almost upright position. My eyes flew open and I must have fallen asleep on my hands in a weird position because they both had that tickling pins and needles feeling, like they had been asleep themselves for a while.

"What happened?" I blinked rapidly, relieved to find myself in the cozy guest bedroom instead of in a death tunnel.

"You were screaming and gasping for air. I thought you were choking on something." Alex said as he got up to get me some water from the guest bathroom.

"I was in a tunnel about to be eaten by those things." I took a few sips of water and looked at the time, 8:57 am. Evie would be awake in the next five to fifteen minutes. Alex gave me a hug but I didn't really hug back. Just because this might be the end of the world didn't dismiss all of our arguments from before the arrival of the zombies. I can be such a bitch in the morning too.

I went to the kitchen with my shovel and prepared Evie's baby cereal while Alex met up with Chris to spar and check the perimeter of the house. Doris came in with a sleepy eyed baby in her arms.

I was putting the last spoonful of cereal in Evie's mouth when I heard some unusual noises from outside. I peaked through the shutters at the front of the house and saw a jaw dropping sight. There were a dozen, or so, zombies shambling up the driveway and two fast moving zombies leading the way. All I could think was "this can't be happening". Don came darting out of the master bedroom while pulling a sweater over his head. He had obviously looked out of a window too. We just looked at each other not saying a word. Doris read our faces and said she was taking Evie to the attic.

We had prepared the attic as a place we could retreat to in a worse case scenario. It seemed more logical than the basement since we could collect rainwater from there and, unlike the basement, zombies couldn't eventually claw through the wood to get at us. Picturing Chris's fiancée clawing at a mouse hole had made us think of that.

Alex and Chris came flying through the back door, locked it and pushed the heavy bookshelf in front of it. We thought this was the end, for real. The men looked out the window assessing the situation while I put on my heavy hiking boots and a sweat shirt. I did a few quick stretches too. I'd hate to get a cramp at the wrong moment. Hopefully we can just remain quiet and the damn zombies outside will pass us by. I hoped.

It seemed as though none of us wanted to breath for fear they might hear us. Don quickly ran to the den and came back with a pair of binoculars. The two fast moving zombies had changed direction and were now going to the left, then they switched direction again as though they were chasing something. The slower zombies tried to follow their lead but couldn't keep up thus disbanding their group a bit. Don searched and found what they were chasing. It was a woman running at a good pace. She wasn't trying to run away either. That's when we watched this woman turn around and stand her ground.

The slower zombies were now a good distance away from her as she drew a sword from her side and held a gun in the opposite hand. She never fired a single shot. I felt like I was watching an action or horror movie. She decapitated the first zombie running at her with one smooth move. It's head flew into the air landing behind her and it's body kept running a short distance before falling to the ground. The second fast zombie got a swift kick in the chest, knocking it down. She brought her sword down through it's forehead, twisted the blade and withdrew it as smoothly as she had decapitated the first zombie. The small zombie group had almost caught up to her as she began to jog further away in a small arc.

"Should we help her?" Don asked as he lowered the binoculars.

"She seems like she can take care of herself." I answered.

"Yeah, but there are a good dozen out there and having her run around in the front yard might attract more, if there are more nearby. We could help her and be saving our own asses in the process." Chris stated while keeping his eyes glued to the scene outside.

I said that if they wanted to go help her it was fine with me but I was going to stay in the house with Evie and Doris just in case helping the stranger outside turned out to be a bad decision. The men left the house and I locked the door behind them. I double checked that the attic stairs were drawn up and that Evie was safe before I picked up the binoculars and went to the window.

The guys had almost reached the furthest part of the front yard when I saw the woman yell something at them and they split up in different directions. Each one now had a few zombies going after them instead of the entire dozen. Smart, I thought. She's separating the zombies so they're easier to handle.

Chris's first undead victim looked like a teenager missing one side of his face and part of his shoulder on the same side. His hair was badly matted with blood and his shirt was torn up. Chris hit him first in the neck, right where it connects to the body at a diagonal. This caused the zombie teenager's head to tilt with his ear almost touching his shoulder. Then Chris finished him by slicing his skull open the same way I had seen natives slice coconuts in Hawaii.

The rest of the zombies were killed, again, either by having their brains turned into a scrambled mess or by having their brains chopped up like a cob salad. When the last zombie body hit the floor Chris, Alex and Don all looked completely spent. Sweat dripped down their faces and drenched their clothes. I searched the battle field and found the woman scouring the ground. She was looking for something.  I got a good close up of her face as she found what she was looking for. She smiled a little. She skewered the severed head from the first zombie she had decapitated the same way I used to poke the olives out of my dirty martinis. she let the zombie head slide down the tip of her sword, just a little and just until it's mouth stopped chomping.

As the woman walked closer to the men she wiped her sword on the pants of a zombie and sheathed it. She was dressed like she had stepped out of a Matrix movie, all in black. Each of the men shook her hand, introducing themselves, I guessed. They all started walking back towards the house pretty quickly. I grabbed a garbage bag, a bottle of bleach and went to unlock the front door. I yelled up to Doris to remain quiet until I came and got her. I didn't care that this woman had just fought side by side with my family and Chris. To me she was still a stranger I knew nothing about and I still had a daughter to protect. She was the last one to step into the house and she extended her hand out to me.

"Hi, my name is Melissa but you can call me Mel." She gave me a little smile as she said this. Her smile unnerved me because it was the same little smile she had when skewered the zombie head earlier.
at 6:18 PM