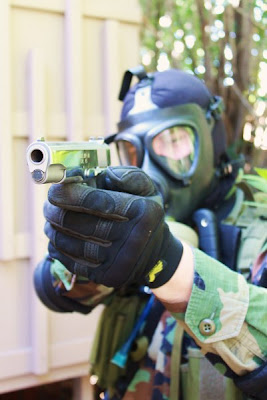 To think that this morning I was worried about what I was going to cook for dinner and thinking that I hate the way I dress these days, too casual, and now I'm defending myself against zombies with a shovel! It's true that life is what happens while you're busy doing other things. I think John Lennon said that but don't quote me. I'm almost half way home and I haven't had to re-kill anybody else so far. The few zombies I have seen didn't seem to notice me. I don't think smell is a factor for detection. I'm guessing they rely more on sight and, definitely, sound. You might be wondering why I didn't ask for a ride from that couple earlier. Well, I think I'm safer out here on foot alone than in a car with two people who can't keep it together long enough to save their own lives. I wonder if Alex has gotten the picture I sent him earlier of the dead store manager? He should have replied...

"FREEZE!" A person in a gas mask yells at me from behind. I stop in my tracks. Is it the police or maybe it's the Army?

"TURN AROUND!" I slowly turn around to face the barrel of a gun pointed square at my forehead. I was expecting to see a team or at least a couple people but there is just one person behind this gun. I can't tell if it's a woman or a man because they're wearing a gas mask, a bulletproof vest under a forest print camouflage coat, army pants and  black leather boots. Their voice has no distinctive qualities.

"What?? Are you going to shoot me? I think you should save your bullets for some of the dead people walking around here. Not to mention the noise will most..."

"You might want to be a little more quiet, why don't you take the mask off so you..."

"SHUT UP (moves the gun closer to my head) AND TELL ME YOUR NAME!"

"Jamie..My name is Jamie, Now get your gun out of my face!" I take a step back and watch as the gun is slightly lowered. I make sure I have a firm grip on my shovel and I start wondering if I am going to have to kill more than zombies today.
I suggest that this person takes their gas mask off since it will limit their vision and whatever going on doesn't appear to be airborne since I have killed a few of them and haven't turned into one. The gas mask just shakes it's head "No" at me.

"Suit yourself" I say and turn to walk away. I feel a hand grab my free arm and turn me around. Instinctively, I swing my shovel and knock the gas mask off of a very red faced man. He still keeps a firm grip on my other arm and strikes me across the face with the back of his hand. What the hell is going on? For the first time since I woke up this morning I am actually scared. The one nice thing about Zombies versus humans is that Zombies are predictable. Humans, however, are not and humans scare me much more than Zombies. He must have cut my face when he struck me because I can feel warm blood running down my cheek, into the corner of my mouth.

"You're coming with me little lady. This here is the end of the world an' I'm not planning on survivin' alone or without pussy." Without his gas mask on I can hear a slight accent and his lack of education. I'm guessing he's one of those crazy "survivalist" guys who likes to play war in the woods on the weekends and probably lives alone in a cabin somewhere. Supposedly there are a bunch of people like that in the hills surrounding my town. But this is the first time I'm having the pleasure of meeting one.

I start trying to think of how I'm going to get out of this. He has already hit me once without thinking twice and I'm sure if I try to run he would shoot me in the legs. To him I'm nothing more than a warm body and a future prisoner. I scan the area around us and can't see anything moving, Damn! Where are the Zombies when you need them?

"Okay, let's not get out of hand. I'm sorry that I hit you with my shovel but I have had a very nasty morning and I'm really terrified." I do my best to appear helpless and sincere as I say this, stepping closer to him and gently pulling my arm free from his grip. He looks at me and smiles, he thinks he's won me over. I remember the dark shadow back at the Laundromat which isn't too far back.

"You know if we are going to survive together we should get some supplies, like food and water. Why don't we go to the supermarket and see what we can find and then we can take it..."

"Back to my house." he interrupts me " That's a good idea. See Jaime, we're going to become great friends, I can tell." He picks up his gas mask and we start walking back in the direction I had just come from. I keep thinking about hitting him again with my shovel but if I don't knock him out on the first blow he will have the upper hand and I may never make it home. Just as we are by the front door of the laundromat I kneel down like I'm fixing my shoe. The red faced man is between me and the dark doorway. I clear my throat really loud and fake sneeze.

"Common, get up." He tells me. I don't move, still crouched down, I can see something moving just past the threshold of the laundromat. The red faced man didn't even notice the Zombie creeping up from behind because he was so focused on telling me to get up. I prepared myself to run.

Two hands grabbed the red faced man on either side of his throat, digging it's already bloodied hands and fingernails deep into his skin. He tried to scream but his breath was cut short by the Zombie's fingers, now buried halfway to his Adam's apple. The last things I can hear as I'm running away is wet, gnawing noises and the scuffle of the red man's army boots as he's dragged into the laundromat by his neck. If he comes back as a Zombie I'm going to take great pleasure in crushing his skull. Once I get back to where he first pointed his gun in my face I slow down and look back. There are a few shambling shapes in the middle of the street, too far away for me to worry about. I turn back around, towards my house. Same thing, a few shambling figures, unfortunately these figures I do have to worry about. I lean my back against the building next to me. I control my breathing and prepare myself for the upcoming battle.

My cell phone chimes, a new text message has just been received and I open my phone.

"WTF! Get home NOW! I'm packing Evie's bag, we're going to my mother's as soon as you get here. HURRY!"

I guess Alex finally saw the picture I had sent him of the twice dead store manager. My breathing is better, I'm exhausted but if I can make it just four more blocks I'll be home. I take a quick sip of water and look at the inside of my hands. They hurt like hell from the blisters forming on my palms. I need to remember to get gloves.
at 6:18 PM