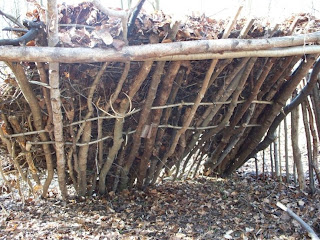 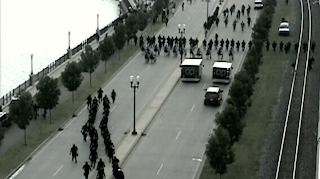 The days were getting warmer and everything was just starting to get a little greener. I envied the birds migrating back. Perched high in the trees looking down on us. They were safe from zombies and worry. I wished that we could become untouchable like that. It wasn't even noon yet and we had already sent almost twenty five zombies back to hell. Evie was getting more and more restless having to be stuck in the house day after day. We had to take her further from the house to play because the immediate vicinity around the house was contaminated after having slaughtered so many undead there. We had tried to keep up the habit of marking spots where we killed the god forsaken creatures until yards looked like a crazy zen rock garden. Eventually we ran out of rocks and gave up.

Evie was being particularly feisty so Alex, Mel and I took Evie into the woods to play. One of us stood with Evie while the other two searched the immediate area. Then we re-grouped and played tea party or let's cook with dirt and leaves. Today we had a new game and Evie couldn't play. Mel took Evie back to the house. Alex showed me what he had found. It looked like a fort or lean-to made by a hunter or survivalist type person. There was nothing in the well camouflaged structure. We couldn't see any footprints around it either. We both knew that this fort hadn't been there just a couple days ago. We knew these woods almost as well as we had known our own house. Whoever had made this had done so recently and was probably not far away.

As soon as we got back to the house we reported what we had found. Don asked how big the fort had been. I said it was just big enough for one big man or two small people to lay under. He guessed that it was, most likely, made by and for one person. He wanted to see it for himself. Alex and I took Don out into he woods where the small fort had been and it was broken apart. Pieces of the little structure were scattered all over. Whoever had done this was trying to cover their tracks. We looked around with our weapons ready. I heard a crack from above me, like a branch about to break under the heavy weight of something. I was shocked to see a man clinging to the tree just above my head. Don and Alex saw me looking up and their mouths dropped open just like mine had.

He was dressed in forest camouflage fatigues. His face was covered in dirt and totally emotionless. His gaze back down at us was one of intrigue and speculation. He was sizing us up and quickly. The front of his coat had the name " Samson" on the front left side. Something about this strange man in the tree made me want to laugh. But I didn't.

"Samson, why don't you come down out of that tree. We won't bite. I promise." I called up the tree while slowly placing my shovel on the ground by my feet, as a gesture of good intent.

I never saw someone get out of a tree as gracefully or fast as this big dirty man had done. He looked more like a cat than a human.

On the walk back to the house he told us his first name was Dennis and he was a trained soldier from the US Army. He had been living in the woods for the past month or so, putting as much distance between him and urban areas as possible. He had been part of Operation Clean Sweep before going AWOL. The story he told us after was the first piece of outside news we had heard since the start of this nightmare and what he told us was horrifying.

His team had been called into a semi large city once the initial threat had been established. Hospitals were overrun and local police forces were insufficient or nonexistent. Operation "Clean Sweep" was put into effect. Dennis and his team started out on the west side of the city while another team started on the east. Both teams were assigned to line up side by side and eliminate anybody they saw. Tanks lead the way crushed cars and other obstacles which might slow them down. Dennis said it was his first call to actor duty and he wished he had been called into some other war instead. He saw people crushed by the tanks; their inside slowly being squeezed out through very open orifice. As they marched forward they shot every living and non living thing that moved. Killing zombies wasn't a problem but killing innocent civilians was. The straw that broke his back was when a mother and her young child came running at his team screaming for help and he watched helplessly as the soldier next to him dropped her with a single shot to the head and then shot the young child as he grabbed and cried over his dead mother on the ground.

I watched Melissa as Dennis told his story and saw a spark of sympathy or empathy. It was hard to tell the difference. Dennis said that he ran away the first chance he got and headed for the woods. He didn't want to kill the people he had sworn to protect. The survival skills he had learned in the armed forces had proven very valuable, however, and he thanked the army for that. Doris asked if he thought the army would be coming out to where we were to  "clean house" like that. Dennis said that, eventually, they would be here but for now they were mainly focused on densely populated areas.

We ate our dinner of pasta and canned green beans. When it was time to go to sleep Dennis asked if he could sleep on the roof. none of us saw why he shouldn't so he took a blanket and bid us all good night.