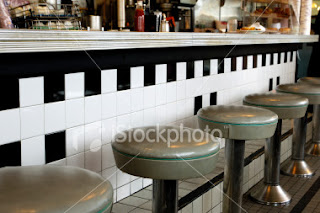 The three walked silently as they interweaved their paths through backyards, over fences and ducking behind cars. None of them had weapons, so the best tactic was to go  undetected by the dead. Dennis remembered seeing a small diner on the other side  of town, closer to our place. It was pointless to try and run around in the dark, especially unarmed. They quickly decided it would be best to find a safe location to hunker down in for the night. Who knew if the dead could smell a living person? Similar to a snake detecting the heat of it’s prey. If this were the case, then zombies would have quite an advantage in the dark.

The diner would be locked up tight. But if it wasn’t, then we could assume the location was compromised and the dead may be inside. Chris found a baseball bat, Dennis found a lead pipe and the woman found a golf club. They walked up slowly to the little diner with metallic silver siding. Chris kept jumping at his own reflection as they trailed the wall, peering into the windows. Until they got to the front door. There were two sets of double doors. So far so good, the big, glass doors were clean and they were locked.

Chris and the woman stayed by the front doors while Dennis broke into the kitchen door. The overwhelming smell of rotten fruit clawed at Dennis’s eyes causing them to tear. It wouldn’t matter if there weren’t any zombies inside if it still smelled like there was. As he blinked hard and caught his breath he closed his eyes and listened. Nothing. If there had there been a zombie in the this putrid smelling kitchen it would have been alerted by his kicks to the door. Still nothing. He ran across the kitchen, through the single swing door, out into the main dining area, over to the register and thanked his luck that it wasn't an electric cash register. It was an old analogue one. He hit the total sales key and the drawer popped open. A set of keys with a small silver elephant keychain rattled quietly.

Dennis had worked in a diner very similar to this one when he was in high school. His dad had been the cook. He was always the first one in the kitchen and the last one out. Dennis had helped him close up many times and the cash drawer was always where the front door keys were kept. He unlocked the double glass entrance doors and gave a quiet whistle. Chris and the woman ran out from the shadows, closing the doors behind them. The front of the restaurant didn’t smell bad at all. The foul air was almost only present in the kitchen. They managed to move a small fridge over to close the broken back door.

They found new jars of olives, Marchiano cherries, ketchup, packets of sugar and salt behind the counter. There was even warm bottles of water in a corner of the dark display fridge. The cakes and pies had long turned into festering, moldy mounds under their glass covers. They rotted and dried up long ago and now only remained as dark gray and blue carcasses. The three made a bizarre meal out of the condiments and garnishes they had found.

Chris explained how he had been tied up in a room with leather whips and chains on the walls. His restraints hadn’t been tied properly and he was able to loosen them. Frank didn’t notice and kept raving on and on about his daughters. Eventually Chris came up with the idea to tell Frank that he had met other survivors, women survivors who had little girls with them. Chris made a deal to tell Frank where they were if he promised to let him go when he came back with the women. Frank immediately agreed and no sooner than Chris had given him the fake address and fake descriptions of the women, Frank was gone. This is when Chris got free and ran down to the first floor. That’s when he heard strange noises coming from the pantry.

Sounds of the undead eating, feasting, killing. At first, when he looked in the pantry, it didn’t make sense. The boxes of pancake mix were neatly stacked on one wall. Aunt Jemima smiled happily wearing her new strands of pearls. That’s when Chris saw the back wall wasn’t straight. Frank had accidentally left the hidden door slightly open. Chris peered into the dark, moist, bloody room. The scene of horror was overwhelming. He had to find Dennis and get out of this house of horrors. After searching the room and finding the exit Chris went back into the house. Searching the top floor downward. Finally finding the basement door, feeling the woman’s warm body in the darkness, freeing her and then releasing Dennis.

Dennis thanked Chris and put another three olives in his mouth.

“I wish I had a martini to go with these olives.” the woman said.

Chris and Dennis look up at her and chuckled.

“Too bad this isn’t a bar.” Chris replied.

The three stopped eating and looked at each other before bursting out laughing. They quickly stopped but for a split second the world was a happy place.

“Guess we can bond as friends in the best way, like only alcoholics can.” the woman said as she pulled out a bottle of wine from the far end of the counter.

“Damn, did I just die and go to heaven?” Chris  joked. “ What did you say your name was again?” Chris asked the woman searching for a bottle opener.

She put her fingers round the top of the cork screw and began turning. The silver twist lowered into the cork, further and further down. Each twist bringing the promise of booze closer to their lips.

“My name is Grace.” The bottled popped open and Grace looked at the two men with a smile. Something about her was relaxing and comforting. They spent the night drinking and whispering on the floor of the diner. Once in a while a shadow would appear to be moving somewhere on the other side of the windows.
at 4:53 PM 3 comments:

REVIEW of The Walking Dead on AMC 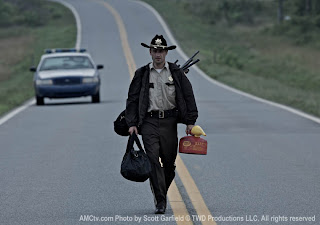 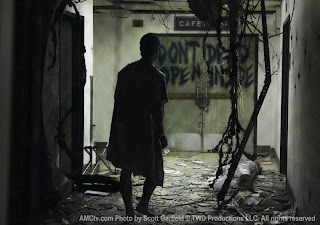 Like many of you out there I watched the premiere of The Walking Dead on Halloween night. I have to admit that I was slightly disappointed.

I read the first compendium of The Walking Dead and it is a must read for any zombie fan. That's why I don't understand why the director of the TV show didn't follow the perfectly made storyboard (comic book) already available.

Within the first 3-5 minutes of the show I was unhappy. I feel like they tried to explain too much through dialogue instead of just letting the viewer learn about the characters through their actions. You don't watch a movie or show to have a story told to you, you watch to have a story shown to you. The pace of the TV show left me shocked at how little they showed in 90 minutes. Disappointing.

On a good note, I think that the casting so far is pretty on point and the zombies look fantastic. I am glad that they used real extras for the zombies instead of trying to do it all in post with CG effects.

Overall, I feel like they should have stayed truer to the comic and not tried to ad lib so much and the makeup and visual effects rock! I will be glued to my TV faithfully next Sunday night for the next installment of The Walking Dead on AMC. Hopefully it gets better from here (fingers crossed).
at 12:05 PM 1 comment: