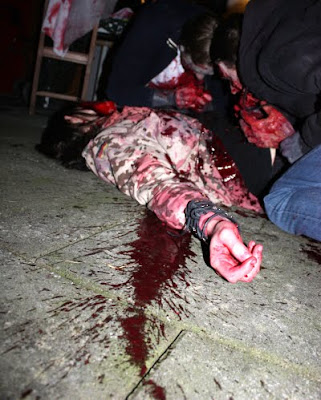 Our walk was quiet except for a man dragging his legs. He left pieces of flesh and smeared coagulated blood on the pavement as he went. He had no chances of winning against us. But zombies don't weigh their odds when they find a fresh target. They just go for it, teeth first. Mel kicked the man in the face and stuck her sword through the top of his skull. The gooey trail the man left behind lead back to the front yard across the street from the little blue house we were going to. There was a wheelchair overturned by the front porch. I can't even begin to imagine what might have happened.

The little blue house looked like a home from a fairy tale. It was a wonderful royal blue with white shutters. There were four hot pink plastic flamingos on metal rods stuck on either side of the porch. I could see a child's jungle gym and sandbox to the left hand side of the back yard. To top it all off it was surrounded by an adorable white picket fence.

We walked around side of the house. Everything seemed in tact until we got to the back. The screen door that used to cover the back door was torn. It looked like something or someone had run straight through it and into the house. The back door was left open. We could hear faint sloshing and wet tearing noises from inside the dark house. We looked at each other and steadied our weapons. We had planned for just such an occasion. There was no need for us to speak.

Melissa would go in the house and see how many were immediately inside while Chris and I stayed by the door. Once she had seen the ones closest to the door she would come back out and signal to us. As soon as she got a comfortable distance from the house she would call out, drawing whatever outside. This was plan number four on our list of hypothetical situations. Before Melissa went inside I put on a pair of old batting gloves Doris had found for me. They used to belong to Alex when he was younger and was into sports. They were perfect for gripping and swinging my shovel. Chris nodded at Melissa and she stepped through the screen door slowly, barely making a sound. The wet noises continued within the house. Melissa unlatched the little hook holding the screen door frame closed. I peered in through the corner of an open window on the side. I could see Melissa disappear through the kitchen and down the dark hallway. She came back running five minutes later. She yelled the words " fast" and "two" as she jetted past us, off the back porch and straight into the backyard.

We could hear two sets of fast moving footsteps not far behind her. They came running. The first zombie darted past Chris like a blur. Chris caught him in the back of the head with his machete. Faith was stuck in the first zombie's head as the second zombie was about to come running out. I caught that undead bastard square in the face with the side edge of my newly sharpened shovel. It cut deep into the bridge of his nose, right below his eyes. It didn't go in far enough to re-kill him though. So I had a live zombie stuck on the edge f my shovel. The curve of the shovel wouldn't let me pull it out without risking my safety. Melissa saw this and came to help me out. Chris was still shimmying Faith out of the first zombie while it lied face down in the grass. I put all my strength into swinging the shovel with the zombie attached knocking it off balance. It landed on it's knees. If it had put it's hands together it would have looked like it was praying at Sunday church. Just as Mel was close enough to help me I heard a loud cracking sound and my shovel came out the back side of the second zombie's skull. The top half fell forward and the rest of the body fell backwards. The brain wasn't entirely damaged but there were two distinct slices now laying on the lawn. Both zombies had been young men and both zombies were now dead forever.

Melissa looked at me and gave me her little smile again. I smiled back this time. We stood next to each other on the back porch and Mel whispered what she had seen inside. The two zombies we had just sent to hell were the only two she had seen inside. They hadn't seen her approach because they were too busy eating someone on the floor. She said the person on the floor must have been looting homes as well because a large tote bag of stuff was spilled on the floor next to the body. I asked if she could see if the victim's head was damaged. She said that the victim's face had been ripped open. We could assume the brains had already been eaten but we were still goin to be on guard in case we were wrong.

Chris volunteered to stay watch outside while I went in with Mel first. He would go in after to fill his backpack. The inside of the house looked pretty ransacked. The pantry was completely empty and my heart sank. I was hoping to find boxes of baby cereal and jars of apple sauce for my little Evie. Instead I found bare shelves. My stomach growled a little. Mel lead me to the next room. Sure enough there was a young woman in a camouflage jacket on the floor. Her brain cavity was empty and her lower intestines were partially eaten. Blood was splattered around her. Not far from her body was a tote bag and I could see a jar of baby food peaking out. Not too far from that several jars had rolled to other spots on the floor. Maybe this trip wouldn't be a complete waste of time after all.
at 9:07 AM