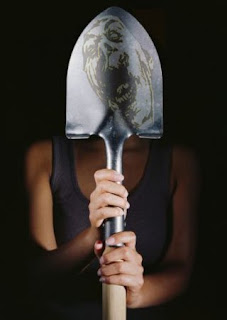 I was on the complete opposite side of the large parking lot as I watched the old zombie woman get struck by a small sedan. I wanted to yell out to the two people getting out of their car, "WAIT!" - "STOP!" -"DON'T GO NEAR It!", instead I leaned over on my knees trying to catch my breath from killing headphones woman. I watched as the driver ran over to the body in the road. The passenger approached the gruesome scene slower and with more caution when the driver put his hand up telling her to stop. It looked like he was dialing on a cell phone as he stood dangerously close to the old woman's body. I caught my breath and moved as fast as I could towards them, waving my hand that wasn't holding the shovel. The bananas in my stomach made me feel a little queasy and I tried not to notice.

The passenger saw me first and yelled to her companion while pointing in my direction. I still wasn't close enough for them to hear me. You would think I was crossing the parking lot to a huge stadium. The driver looked over at me while holding his cell phone to his ear, completely distracted...

The old woman's teeth found his ankle and bit down hard. He almost lost his balance and jerked his foot back. Her top set of dentures flew out of her mouth as well as a couple of her bottom front teeth. I was now within earshot and yelled for them both to get away from the body. The passenger took one look at my shovel, reddened face and blood splattered clothes and promptly got back in the car. The driver was still backing away from the old woman looking totally confused and freightened. I got next to the old woman who was still gnawing at the air. Her back appeared to be broken in several spots and her left leg was bent in an impossible pose. The parts of her body that had skidded across the pavement before she landed revealed exposed muscle tissue and bone. It only took one, well placed, blow of my shovel to terminate her hunt for flesh.

I turned back to the car. The driver stared at me shocked and dazed. He was silent as I got closer.

He just blinked at me like I had grown an alien head out of my nose. I grabbed his pant legs and examined them. His left ankle had teeth marks on one side and bloody smudges on the other. His jeans didn't appear to be ripped or torn but I pulled them up anyways and examined his skin. Nothing. This, obviously, is this guy's lucky day.

I slapped him hard and the passenger hit the car horn at me. Great, I thought, let's just put a huge target on our precious little selves and call any lurking zombies to us for chow time. I waved my hands at the stupid,scared woman in the car to not do that again. I grabbed the man by both of his arms making him focus on me as I tried to explain the situation and advised him to get off the road,go home and avoid any and all strangers. He just nodded and got back in his car. I stepped aside as they drove off. There was an uneasy quiet surrounding me, not even a bird was chirping. Across the street was the small park where local bands would play on summer nights and where I used to push my daughter on the swings. Now there were three zombies shambling towards me. God damn car horn! I'm hoping these things rely on sight and sound and not smell or telepathy to locate their prey as I took off away from them and towards my house, quickly, not running though. I don't want to exhaust all of my energy in case I have to fight along the way. Just by walking fast I'm able to put good distance between me and  the zombies in the park. The entire town looks like it's on pause or like it's a holiday but nobody took the time to lock up. I peer into the front window of the local laundromat. A dark figure is crouched over a huge pool of blood but I can't see what else. They're everywhere. I need to get home.
at 7:37 PM