Part XI - Quiet before the storm 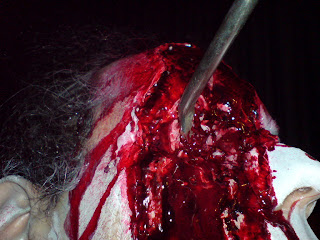 The first week at Alex's parents house passed relatively uneventfully.
We checked the stone walls and low fences around the front three
"sides" of the property and mapped out where we could try to put up
more. Like I said before, the back of the house was directly connected
to a state park so there was no way we could fence that off and
thought it would be a bad idea to obstruct our best escape route. Not
to mention, there weren't any houses or people living in that
direction so we didn't feel there was a huge threat. Even after Don
had told us about the bear carcass.

Everybody took turns watching little Evie and we all watched out for
each other. Nobody went anywhere in or outside of the house
unaccompanied. Life was comfortable despite being alert at all times.
Alex had found a weapon of his own, finally. He took the medium sized
axe from the backyard. The same axe that the zombie his mom had shot
on the way in had  used to use to chop firewood when he was human.
Alex sharpened the blade to a razor point and practiced swinging it
against trees and at the ground. In just a week of wielding his axe I
could see the muscle definition in his arms increase. Evie was
much,much too young for a weapon or to understand what was going on.
Instead her grandmother and I taught her a new game called " Shhh,
quiet, hide...." We taught her that when we put our fingers to our
lips or said "Shhh" she had to get very quiet and find a hiding spot
near us. We thought this would be the best "weapon" she could have.We
practiced this game everyday and very often with her. So now we were
all armed.

The next step was for each of us to practice defending ourselves with
each other's weapons. One of the most important weapons we had to
learn was using Doris's revolver. . I had shot it before, last
Christmas, when we were here. Alex was very familiar with guns but
both of us had to seriously work on hitting a moving target.

Don had a few different target practice areas set up in the woods not
too far from the house. These were the same setups he had taught Doris
on and we saw what an awesome shot she was. There was your classic
"shoot the bottle" and then there were a series of clips on fishing
wire connected with pulleys in different loops through and around the
trees. One person could stand behind you and start pulling the fishing
wire which would make the targets,  attached to the clips,  move. We
would do that the most since zombies don't just stand in one spot
waiting to be killed, again. In between turns and reloading we would
take long pauses and listen if the noise we made had attracted
anything...

After the first week we did see one zombie, in a bathrobe. It was the
same zombie Don had struck down on his way home the past morning. We
saw it walking aimlessly in the front yard through a crack in the
storm shutters. Don volunteered immediately to take care of it since
he was the one who had started the job, he wanted to be the one to
finish it. I volunteered to go with him. Alex stood watch with his
mother from the porch while Chris stayed with Evie watching Finding
Nemo inside the house. We looked around and the zombie was alone. It
heard us approach and turned around just in time to catch Don's heavy
walking stick with it's left cheek and fell to one knee. Then it
looked up and Don swung his walking stick again catching the zombie in
the eye socket. A bloody, gooey substance spurted out a little, then
ran down over it's broken cheek. This last blow sent the zombie
sprawling on it's back. Don finally ended the zombie's undead life by
using the end of his walking stick, which he had sharpened to a point.
He speared the zombie straight through the untouched eye socket and
into the brain. It was quite an empowering sight to see this elderly
man defend our lives so gracefully.

Don rinsed his walking stick off with a power hose and bleach. Doris
and Alex came over with their gloves on and  moved the bathrobe zombie
back behind the bushes. I found a large stone and placed it on the
spot where the zombie was killed. So that we knew to keep Evie from
playing near there.

Back inside the house Don and Doris tried to figure out if they had
known who the bathrobe zombie was. They couldn't. This was a bad sign
since it meant that this zombie hadn't been one of their neighbors or
from the nearby town. It also meant that this zombie must have walked
a great distance to get here and if one zombie could do that... than
more were sure to come.
at 1:34 PM