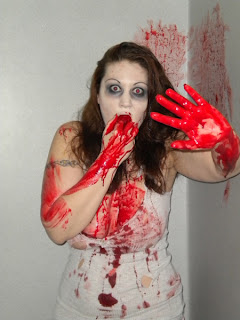 LINK TO PART V - It's not natural


Chris told us how he re-killed his fiancée. Saying that he couldn't believe his own eyes while he was smashing her face on the edge of the marble fireplace in their house. He just kept slamming her face against the solid stone corner until her body had stopped struggling and he was hitting his own hand through the hole in her head. The rage he had that this thing had taken his fiancee's life was limitless.

I asked Chris how his fiancée had become one of those things. He said he wasn't sure but she started feeling sick after being attacked outside of a bar one night.

"Nope, she said she was trying to get in her car after leaving the bar and some guy grabbed at her, knocking her to the ground. She did say it seemed like he was trying to bite her and drooled all over her face before she managed to kick him off and get in her car. When she got home she ran straight into the bathroom and threw up. I just thought she was drunk. But then she told me the whole story...I was speechless and wanted to go out and kill the guy...she convinced me not to. The next few days she got more and more sick. Couldn't hold any food or drink down, had a lot of bloody noses and headaches. Not to mention her temper...she was angry all the time...threw a lamp at me. The day before it happened I even paid a ton of money to have a doctor come to the house. He said she had the flu and was probably PMS'ing...PMS my ass...that was the last day...next morning...I woke up on the couch, been sleeping there instead of the bedroom so I didn't get sick too...horrible scratching noises from the bedroom...I walked in and she was hunched over the corner of the room. Scratching at the base board of the wall where there was a mouse hole. Some of her fingernails were ripped off and bleeding. Splinters of wood were stuck in her hands, she didn't even notice. When she turned and looked at me I knew what was in front of me was no longer my fiancée. I ran to the kitchen and she bolted after me..I grabbed...

" I hate to cut you off, but you say she bolted after you? She moved fast?" I looked worried as I waited,briefly, for the answer.

"Yeah, she was pretty quick, not superhuman fast but at least as fast as a normal person in a hurry." Chris answered my question and I lost my appetite. The wheels in my head started spinning overtime. Fast Zombies...oh god...

Chris continued his story saying he had got a big knife from the kitchen, pushed his fiancée to the floor and stabbed her several times in the back with no success at slowing her down. It wasn't until she was chasing him through the livingroom, tripped and fell against the fireplace that he was able to finally succeed at stopping her. That's when he made the connection that he had just re-killed his first Zombie.

I told him about the events of my morning grocery shopping trip. We began comparing notes. The Zombies I had seen and killed were slow. Whereas his fiancée had been fast. We figured out that depending on how you become infected must affect how you are as a Zombie or something like that.

Alex screeched his chair as he got up from the table. He looked down at Chris and I and said " Aren't you two happy you found each other, you have so much in common." then he walked out of the kitchen.

"Don't mind him, our love story has been on the rocks lately and this whole Zombie situation isn't helping." I looked down at my half eaten plate of food on the table.

"Well at least you know for certain he isn't a Zombie."

"Why? Because he's alive, annoying, jealous and talking?"