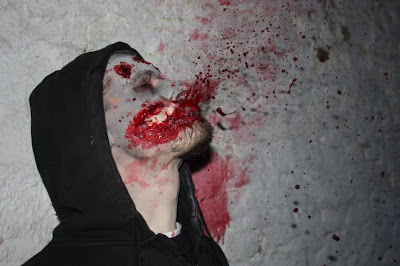 Alex and I had our problems but we still considered ourselves to be a couple. Melissa, Chris and Dennis were a different story. They were single adults in a tragic world. The natural instinct to want to pair off was heavily sensed in the house. But three isn't an even number and the rivalry between Dennis and Chris was all too apparent. I liked both of these guys and didn't want them to hurt each other, especially since we all walked around with various weapons at all times. I tried talking to Mel and get her to lessen the tension. She laughed at me and said it wasn't her problem if they wanted to compare dick sizes over her and she even encouraged it.

It was a particularly rough morning. The zombies were out in full force and we all had to fight. There were so many that only one of us could take a break at a time. There were cops from the next state over with missing limbs and missing eyeballs. Various men and women of all ages, from all walks of life, in advanced stages of decay trying to eat us. Don struck a zombie in a black hoodie across the face and blood flew out of it's mouth.The smell was over whelming. Do you have any idea how hard it is to swing a shovel while vomiting? I can tell you that it's unbelievably hard. The hardest part is staying alert when the tears swell up, your throat gags and your stomach lurches right before hot vomit comes out your mouth.

The end of my shovel found it's sweet spot in the back of an old man's skull just as I finished polishing my boots with my breakfast. I hate wasting food like that. Next time I'm not going to have breakfast before these heavy zombie battles. I heard a yell from behind me. I saw Mel on the ground holding a zombie off, only inches away from her throat. Her sword was lying on the ground next to her but if she reached for it she could count herself in with the enemy. I yelled for her to turn her head and close her eyes. This was hopefully enough of a precaution to keep any zombie juices from going into her system. She turned her head and squeezed her eyes like a little kid might do under the covers at night. I drove the full force of my shovel into the side of the zombie's head sending it sprawling at Chris's feet. Chris sliced open it's head and massacred it's brain. The zombie numbers were beginning to dwindle and Mel said she was going inside. Now, looking back, I wish I hadn't saved her life that day...

I glanced over at the house in time to see Mel closing the front door behind her. Doris was inside with Evie. We finished clearing the front yard of the walking undead and then we dragged the bodies away from the house and across the street. Dennis and Alex had begun to dig a very large hole. It was going to serve as the first mass grave of many. Don had suggested we burn the bodies but Dennis said the smoke might cause us to have unwanted attention from living people.

As soon as I stepped back into the house I knew something was wrong. There was no sign of Doris, Evie or Melissa. Don was with me and sensed it too. The kettle on the stove was whistling at full volume. Doris never let it whistle. It always seemed as though she instinctively knew when the kettle was about to blow just before it ever did. I ran to the bathroom. Maybe Evie had a messy diaper and they both had to clean her up. The bathroom was empty. Don checked the master bedroom and bathroom. Nothing. All of the bedrooms were empty. That's when I heard Don yell from the garage.

Doris was on the cement floor bleeding from her stomach. This wasn't a zombie attack. Doris had been stabbed through her abdomen, straight through her back. This was the first time I had ever seen Don cry and it would be the last time as well. Doris was barely conscious.

I couldn't believe my ears. Melissa was gone had had taken my little Evie with her. Don tried to move Doris and she begged him not to. She said it was pointless. There was no way she was going to survive a stomach wound like this. The blood on the floor had stopped spreading as it began to coagulate. Doris looked up at her husband and handed him her small revolver.

I stood up and Don nodded. I walked out of the garage and closed the door behind me. Alex, Chris and Dennis were just getting in the front door. They all looked to exhausted to even notice anything was wrong. I sat down in the den as a single shot rang out from the garage. The men all looked in that direction and then at me as I stared at the floor.

Alex walked over to me, lifted me out of my seat and slapped me. I quickly snapped back from the shock that had started to take hold. I just stared at Alex unable to say a word. He shook me as he screamed at me.

"WHERE THE HELL IS EVIE?"

I shook free and Don entered the room. He said that Doris was making tea when she heard something crash in the garage. She had gone to investigate and found Mel in there with Evie. Mel had spilled a small box of stuff on the floor. Melissa  said she was trying to find some baby puffs or cookies for Evie. When Doris approached her to help Mel stabbed her through the stomach with her sword and knocked her out with one swift kick to the face. Doris came to just in time to see Mel carrying Evie out the side door of the garage facing the woods.

That was the last thing Doris had said before she closed her eyes and her pulse stopped. Don shot her between the eyes before she had time to open them again.

Alex fell to the floor sobbing. His mother was gone and his daughter had been kidnapped into a world of starving zombies. I wanted to blame him, to blame all of them for having trusted Melissa. But I couldn't, after all, I had trusted her too. Despite what my intuition had told me when she first showed up. The question now was "how we were going to find Evie?". Melissa had, at least, a couple hours head start on us. Not to mention we were all dead tired from the mornings battles. Dennis said that he could track her if she went into the woods. If she went towards the street he could track her too. But the trail would be harder to follow over pavement. This gave me a tiny bit of relief. At least we could follow her. Hope of getting my baby back made me content but my hopes of getting revenge made me down right happy. I wanted to find this woman and make her suffer. How dare she take our hospitality and trust for granted and rape us of our family! No, this woman wasn't going to go unpunished.

We regrouped, packed the things Dennis told us to and followed him outside. He scoured the ground outside the garage. We were in luck. Melissa's path lead towards the woods. Don stayed at the house with Chris. Just in case Evie found her way home or in case that crazy bitch came back. I think Chris didn't want to come because he still had strong feelings for Mel and didn't want to get in my way. Alex, Dennis and I went further into the woods than we had ever been. It was going to be a very long night.
at 8:18 AM