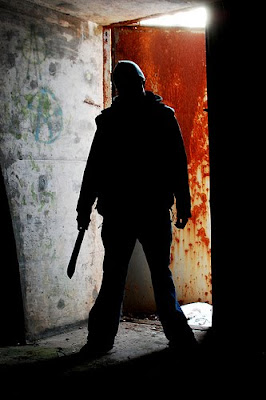 LINK TO PART V - It's not natural

I turned the shower off, pulled the Mickey Mouse shower curtain back and tried to tune back into what Alex was saying. Something about irresponsibility, promises and my lack of commitment. Then I heard the backdoor to the house close and footsteps going out of the kitchen and into the hallway downstairs. Someone was in the house. I quickly  grabbed a towel and wrapped it around me. Yet another point and time when I wish I would have bought a robe. I put my hand over Alex's mouth and then give him a hard stare, then pointing to my ears in the international sign for "listen, dumbass". The footsteps were slow and cautious. It only sounded like one person too. I grabbed my shovel from the corner of the bathroom. My shovel has become my new favorite pet, maybe I should name it later. Evie began to cry, Damn It! She's awake from her nap. Alex jumps up but I pushed him back down, shaking my head and closing the bathroom door. I dart to my daughter's room, go in, closing that door behind me and catching a glimpse of a man coming up the stairs, straight in my direction. Evie is still crying but I can't deal with her right now. I hold my shovel ready to swing or impale the first thing that walks through the door. The doorknob starts to turn...I know for certain it isn't a zombie since they won't use doorknobs. I wait till he's at just the right point and swing. The man dodges the blow while falling back. He slips on the top step and falls down the stairs. I run to the stairs, pick up a machete lying on the fifth step down and stand next to the man with his own weapon hovering over his throat.

He opens his eyes and blinks several times. He isn't looking at the machete or my face. That's when I realize I lost the towel I was wearing. I tell him he better say something smart and fast or I'm going to open his jugular on my entryway floor.

Alex is looking over the banister with Evie in his arms. I look up at him and he looks completely disgusted. Like it's my fault I'm standing naked over some strange man with a blood covered machete! I move back and let the man sit up but keep the machete as I walk back upstairs. The man  just sits on the floor for a while rubbing his back and neck. I hand Alex the machete and take Evie back into the bedroom so I can put some clothes on. Now, I'm happy I don't wear a lot of fancy clothes. High heels and mini skirts with silk blouses aren't very good for fighting or Zombie killing. Evie is oblivious to what's going on and is content playing with her penguin and shopping cart. I put the gate up in the bedroom door and return to the top of the stairs.

"Thanks for the compliment but what the hell are you doing in my house?" I shout down.

"My name is Chris, I'm just scavenging for food and supplies. Your house is the first one I've come to that didn't have a Zombie in the window and had the door unlocked. I didn't realize anybody was home, well anybody alive that is..."

I looked over at Alex. I have told him a million times to keep the back door shut but he never seems to remember that one simple thing.

"Well, Chris, you say you're a photographer... prove it. It will make me feel a little bit better about having you in my house."

Chris goes on for a solid fifteen minutes about his equipment, f-stops, shutter speeds, subjects he's shot and how his grandfather gave him his first camera. If he was pulling my chain and was actually a serial killer taking advantage of the current situation outside, well, he fooled me. I asked Chris if he would like some lunch since I was just about to make some for Evie and Alex. He says he would love some and heads into the kitchen. He was taking his coat off at the table when Alex and I walk in. I walk over to the back door and double lock it while pulling the shade further down. Alex sits down at the table across form Chris looking slightly pissed off. He's probably already imagining that I want to sleep with this guy and run off to a deserted island or some other craziness. But that's a whole other story for another time. 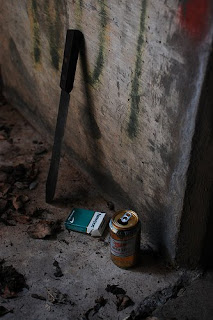 Chris tells us how he's been surviving in the decommissioned artillery bunkers up past the north side of town. He used to DJ underground rave parties there in the nineties. After he ended up re-killing his fiancee that was the first place he thought to run and hide. He was up there for a couple days with a large cooler someone had stashed with beer and cigarettes. Figures it belongs to high school kids who use the place to get drunk and screw. That and the grief of loosing his fiancee kept him okay for those couple days but once the beer was gone, reality kicked in. He was hungry, tired, thirsty and was not going to survive if he stayed in the bunkers with no supplies. That's when he decided to venture into town to gather what he could before going back. He told us how the first few houses he went to had Zombies inside trying to get through the windows at him as soon as he walked up on the front porches. So he began checking back doors. Our house was the second back door he checked. Chris said that if he can avoid Zombies that's his favorite method of survival. Although he has had to kill a few here and there. Hence the dried blood caked to his machete. He named her Faith.
at 11:24 AM