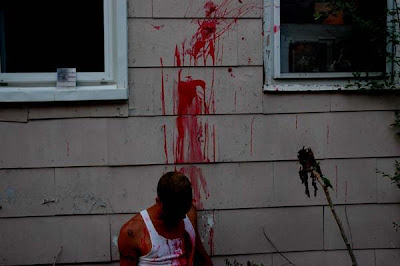 After everybody stripped off their battle soaked clothes, washed up a bit and changed we sat down in the den. I called up to Doris who brought Evie down. She had her purple dog in her arms and extended it out to me. My daughter can be as cute as a button. Melissa was sitting on the floor Indian style when Doris walked in. Her face drained of most of it's blood when she saw Evie and then she had that little smile again.

"Mel, are you okay? You look pale." I asked as I put a hand on her shoulder and interrupting the dead stare she had on my child.

"Nnno, I'm good...it's just...it's just I haven't seen a ...well a living child since this whole thing began...and..." Melissa's voice trailed off a bit and she turned her gaze down to the Navajo rug on the floor.

"Go on, tell us, what's wrong Mel." Don said as he offered her one of his remaining hand rolled cigarettes. She looked at it and gestured that she didn't want one, but in a very polite way.

"This is hard for me to talk about. I was on the road for almost four days and I hadn't seen or heard anything living or alive. I thought I was the last person on earth at one point and I said a prayer to meet up with someone...anyone...I just didn't want to be alone and the silence of it all was getting unbearable. At least when the zombies are around I'm fighting...not thinking...just fighting. For the first time in my life someone heard my prayers. I came to a small town, a really small town, probably wasn't even on any maps. There was a small church right in the center of it. On one side of the church I saw a guy in a white tank top. It looked like he was just looking into the windows, walking back and forth, almost as though he was trying to figure out how to get inside. I could hear noises from inside the church as I got closer and I realized that the guy in the tank top was one of those undead things. When he turned around to face me I speared his head against the side of the church. I could still hear the noises inside of the church...when I looked inside...there were children. It looked like a preschool and kindergarten class. The little kids were trying to climb on top of each other to get to the windows. I guess they had seen the other zombie and thought he was food.
Their little faces were so pale, some were missing limbs, some didn't look injured but were covered in blood. One little girl was completely naked and was covered in small bite marks. Another child didn't have any eyeballs but was facing the window I was looking through. His eyeless gazed felt like he was looking into my soul...I could see a couple pairs of adult legs, on the floor, sticking out from between the pews of the church...I went to the front of the church and the front doors had been barricaded from the inside. I'm not even sure what I would have done if I could have gotten the doors open...
It was such a small town I could see down to the end of the street where there was a neon sign that said BAR and right past that was a gas station. Lucky for me the bar was unlocked and empty. I took some empty beer bottles from the trash and headed to the gas station. The pumps didn't work ...so I siphoned some gas out of one of the cars with a hose and put it in the bottles. I used the tank top from the zombie guy to top off my moltov cocktails...they were just kids...but they weren't...ya know...in any case, someone answered my prayers and I burned a church to the ground. I almost expected to hear them screaming...but they didn't. Those things are already dead, they don't scream...screaming is something living people do, not zombies...

...S'cuse me, Don? Can I have that cigarette now?" Melissa put her hand up and Don passed her a rolled cigarette with a lighter.

None of us could speak. I looked over at Evie who was watching one of her favorite cartoons and then the power went out. Evie ran over to me and I hugged her. We all still remained silent and with the shutters closed it was extremely dark for it almost being noon. Doris eventually got up to find some candles. Don and Melissa smoked their cigarettes and you could hear the paper burn. The embers turned from orange to bright red every time they took a drag. When Doris came back with the candles we each took turns telling some of our stories. Then the conversation switched to us wondering what we should do about the power going out and then finally what we should have for lunch. I left the room to change Evie's diaper and Alex followed me.

"Don't you think it's great we have another person here who can fight?" Alex said as he passed me the baby wipes and held a candle so I could see.

"Yeah, it's great...could you hold the candle a little higher?" I said nonchalantly.

Alex held the candle higher and sucked his teeth. This was one of his little ticks that he did when he was annoyed with me and I hated when he did it. It always reminded me of little stuck up girls in elementary school who would sneer at me when I asked to sit with them at lunch. I finished changing Evie's diaper and then took her into our bedroom for a nap.

"But Jamie you're going to screw up her sleeping patterns, we just got her to sleep in the crib alone and now you're going to put her in the bed. She's gonna get confused. I really think you should put her in her crib." Alex said as he stood over me.

"And I REALLY think you should leave me alone. I don't want her in the other room with a stranger in the house." I got in bed next to my daughter and pulled the covers up over her. She yawned and rubbed her eyes before rolling onto her stomach and falling fast asleep. I wish I could fall asleep that easily.

Alex came around to my side of the bed and crouched down so his face was level with mine. I had my eyes closed but he shook my shoulder anyways until I opened them.

"Sure, you can take a nap...let me just get something straight first. You're apprehensive of a woman who just fought side by side with your family to defend you and our daughter and you call her a stranger BUT a man who breaks into our house with a machete gets to see you in your birthday suit and you invite him to lunch...Did I get that right?" Alex sneers at me.

I just roll my eyes at him and say it's not the same thing at all and for his information the woman in the den wasn't defending US she was just defending herself. Alex went to say something else and I put my finger to my lips and pointed at the sleeping child next to me. Alex flipped me the middle finger and left the room. I couldn't sleep. Instead, I listened to Alex, Don, Doris Chris and Mel talking and, sometimes, laughing from the den. I didn't know anything about the woman in the den and my instincts were telling me to not trust her, at least for now. I had always considered myself a good judge of character and that's all I was going to go on. Something struck me as odd about Melissa. I couldn't put my finger exactly on what it was. Maybe it was that little smile she always had or maybe it was the fact that she knew how to wield a sword a little too well. I really didn't like the fact that she had just told us a story about killing a church full of kids and that memory had been triggered by seeing my little Evie. No, I was going to watch this woman very carefully. I let my hand drop over the edge of the bed and felt around on the floor. My shovel was right there, just in case.
at 12:39 AM