Zombie Dusk by Derwin Gonzalez : Chapter 2 - “ The opening moments of the greatest threat”

ZOMBIE DUSK - Chapter 2 " The opening moments of the greatest threat" 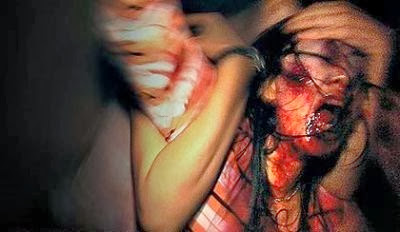 I saw a teenaged girl being dragged to the ground by an elderly woman and a middle-aged Asian man; while a young black man chewed on her arm.  The old woman joined in; biting into the girl’s face.  The Asian gentleman settled for her mid-section and tore into her gut.

Everywhere we looked people were being dragged out of their cars and assaulted right outside the cemetery gates but it was much more than a simple mugging; they were being savagely bitten and chewed on, practically devoured alive.  Oddly their attackers were well dressed but covered in dirt, their skin ashen-colored and their eyes void of life even as they tore into their victims with their teeth and fingers.

“We have to help that girl!” Max pushed me aside and ran down the steps to the door. “Open the fucking door!” 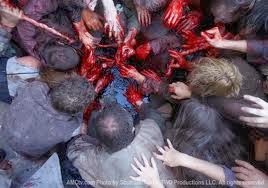 The obese bus driver just stared at Max in shock; shaking his head no.  Two men in uniform appeared at the doors, they banged on them pleading for us to let them on.  The terrified bus driver could do nothing but violently shake his head.  I reached past the driver’s massive gut and pulled the lever opening the doors.  The two men wearing jumpsuits identifying them as cemetery workers rushed aboard.

“They just came out of the dirt!  I saw them with my own eyes digging themselves out of the ground!” The worker told us.

“They’re everywhere, there’s like a hundred of them.  We gotta get the fuck outta here!” His co-worker behind him added.

Before we could respond, as their words were just sinking in, an odor so thick and wretched, I gagged involuntarily, enveloped us all.

“Oh my god what’s that smell?” A disgusted Connie asked.

Suddenly the second cemetery worker screamed in horror as hands reached into the open doorway and grabbed at him.  At least five attackers pulled the struggling man off the bus.  As they all collapsed on the ground they began to feast on their screaming victim.  Max rushed to help him but the other worker grabbed him and pushed him back up the bus steps.

“We have to try dammit!”  Max tried to push past the bigger man.  He hit Max, knocking him down.

“You can’t fight them cause they don’t feel shit, they’re already dead!” He pleaded with Max.  I pulled the lever closing the doors. 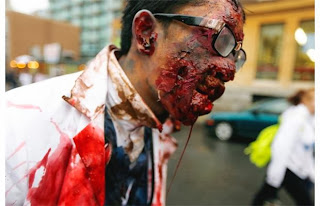 I looked out again and found the teenaged girl laying on the street staring at me as they feasted on her, one of them was pulling out her intestinal tract chewing on it hungrily.  She was no longer screaming, mercifully her body had gone into shock but I could still see her pleading with her eyes, begging me for salvation.  I helplessly looked on; maintaining eye contact, hoping it offered some small measure of comfort to her.  Then I saw it, the light left her eyes and her head fell back limply.  Immediately the monsters dropped her lifeless form and moved towards the bus.

“They’re coming!  We’ve gotta get moving!” I yelled at the bus driver.

This was too much for him; he clutched at his chest and collapsed on the wheel, dead.

We struggled to pull him out of the seat and Max jumped behind the wheel.  He rammed the bus into the cars blocking us, pushing them aside, making enough space to drive onto the sidewalk.  Max didn’t flinch from smashing the bus through the starving dead; they flew in the air like bowling pins.  He floored it heading for the highway as they threw themselves at the bus.  The sirens of approaching emergency vehicles were a welcome sound but Max didn’t slow down as they whizzed by us.

“Hey slow down the police are here.” I tried to calm Max as their gunshots rang out behind us.

“Well good luck to them.” He said as he sped along.

“Bullshit, Hollywood!  Did you see that young girl those things slaughtered?  I just ran her over back there; she was one of them!  She was coming at the bus with her guts hanging out and I plowed right through her.  She flew twenty feet in the air; I look in the rear view and she just gets up and keeps coming after us!  Those cops ain't stopping shit.”

We had laid the bus driver’s body on the back bench.  I raced towards it when I heard a scream.  The bus driver had latched himself on a business man’s back and was chewing through his throat.

The other bus riders surged away from them in a panic like I should have; instead I found myself kicking the thing off his dying victim.  The bus driver fell back but not for long, he rose up and moved towards me.  Immediately I felt a feverish heat radiating off of him.  But still his face was void of any emotion while he lunged at me; bits of flesh and meat falling out of his open mouth.  I grabbed the business man’s brief case and swung it; hitting the bus driver across his shoulder.  He staggered for a moment but  continued coming for me.  Backing away I tripped over the fallen business man. 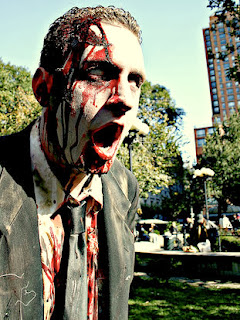 On my back I could only watch the massive dead man about to pounce on me.  A gun shot blasted just a few feet from me.  The shot striking the monster in his forehead, he stood frozen for a moment before collapsing, he didn’t move after that.  I looked behind me and a Latino teenager holding a small caliber hand gun looked back at me shaking in his Jordans.  He held out a hand and pulled me to my feet.  He turned his attention to the gravely wounded business man.

“This dude is fucked up.” The kid said.

The man was gurgling as the blood pumped from his open jugular like water from a faucet.    The kid bent to help him.  I held him back.

“You got any more bullets in that gun?”  I asked him as we watched the man die.  Just as I expected the virus took him less than a minute after he took his last breath.  I destroyed the thing with a bullet through the head because Enrique, the young Latino, couldn’t bring himself to shoot again. 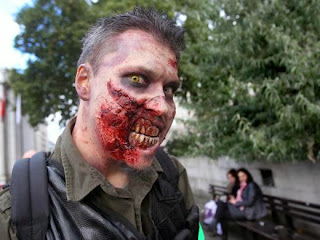 So in the opening moments of the greatest threat humanity would ever face strangers on a bus banded together in order to survive.  It was a scenario that was repeated a million times over around the world for the next few months as mankind avoided extinction by forming small roving, scavenging packs of survivors.   We had been right there at ground zero America; front row seats for Zombie Dawn Eastern Standard Time.

Besides extreme solar flare activity in the days leading to the event there had been no warning.  As the Earth made it’s daily revolution wherever the sun’s rays touched ground the dead arose from their graves.  Only the recent dead posed a threat but even severely decayed corpses struggled so violently to rise they fell to pieces in their coffins. Ten years later of the 26 bus riders only Max, Enrique and myself had made it; we lost Connie just a few months back.    To lose her when the zombie population was being decimated worldwide and the war was winding down was a bitter pill for Max to swallow no matter how much booze he tried to wash it down with. 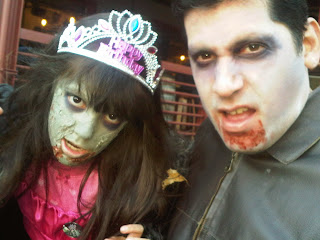