Part XXI - On the path 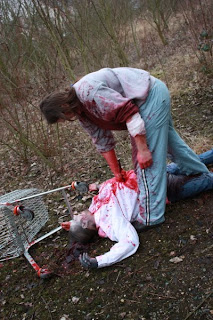 Seeing the dog in the woods made me realize just how small the world could really be. In such a small world nowhere was safe from the hordes of relentless undead. Sure, we were far from densely populated cities and suburbs but that only meant it was a matter of time before the masses found us. We needed to get even further away from civilisation. Maybe the deep woods of Northern Canada would be an ideal spot. Except for the fact that we would have no shelter built there or food. Damn it! Damn it! Damn the zombies! Damn whoever or whatever started this whole mess. If those fucking zombies hadn't shown up my daughter would be safe and I wouldn't be trekking through these woods hunting a crazy woman.

I was so deep in my angry thoughts that when Dennis swung his hand out onto my chest, stopping me in mid stride, I almost yelped. A little further up, just past some trees, we could see two people in the morning sunshine. One was lying on the ground and the other was bent over him touching his lower abdomen. As we watched we realized that the man standing up was pulling a knife out of the other man's stomach. This could only mean that this guy was still a living human. Cautiously, we stepping out from behind the trees and the man pointed the knife at us.

"STOP! Stay where you are!" the man shouted and we stopped. We must have looked like an old western stand off for the full minute we stared at each other.

Dennis broke the silence by taking three steps forward. The man didn't say anything but waved the knife from side to side, clearing saying "no". Alex and I stepped up next to Dennis. If this guy was insane he wasn't going survive if he attacked us. I looked at his arm that had a big bandage on it. He saw what I was looking at and lowered his knife.

"Melissa." the name escaped my mouth without a pause. The man's eyes widened and he shook his head in confirmation. I would have felt sorry for the man who just lost his brother if I wasn't so happy to know that we were on the right path to find my baby girl.

The man told us about his brother, Mark. Mark had wanted to be a tattoo artist but instead ended up working at the pizza hut in their hometown as a manager. When the zombies first made their appearance Mark had gone to his brother's house and dragged him out. He said they had to get out of town A.S.A.P. and head for the uninhabited state park. His brother had, almost always, been right about everything so he went with him. He thought his brother was crazy until he had to kill his first zombie. He and his brother had been surviving in the woods without much problem. There was a fresh water stream not too far and they had plenty of provisions to sustain themselves for a while. That is, until, they crossed paths with Melissa.

She charmed them and seemed really helpless with her daughter, Jennifer.

"Jennifer?" I had a very perplexed look on my face as I said this name. "Jennifer? That's not right, that little girl's name is Evie, she's my baby. Not that psycho bitch's!" Alex put his hand in my shoulder to calm me as I fought back angry tears.

" Well she said the little girl was hers and her name was Jennifer."

I asked the man what had become of Melissa and the girl, he said he wasn't sure. The last time he saw her was last night. They had all settled down to sleep and Mel had said she would take watch first. When he woke up Mel had split and taken most of their provisions with her. He was tied up next to his brother who had a knife handle sticking out of his stomach. He had barely gotten free when his brother came back as a zombie and bit into his forearm.

The man held up his arm with the large bandage. I stepped away from him.

" I know I'm going to turn into one of those monsters...can't blame you for stepping away from me. Shoot, I can't even blame you people if you just kill me right here where I stand. But I wish you wouldn't...after all, we're looking for the same person. You want to find your baby and I wanna destroy that woman for killing my brother and me in cold blood." The man turned his head and coughed up a wad of blood and mucus. He spit it onto the ground away from us.

" I realize we're essentially on the same "mission" but you've been infected. Having you with us isn't, exactly, a safe idea. It's like a bad scenario you see in so many movies and more people always end up dieing. No, I don't think you should come with us. I think you should let us decapitate you now before you change." Alex was right. We had no idea how long it was going to take for this man to change. He was a threat, pure and simple.

The man got down on his knees and begged us to not take away his chance for revenge. He suggested that instead of walking with us he would walk further ahead of us. Check for threats before we approached and if, or when, he turned we could kill him.

"That goes without saying." I said.

Alex and I said fine but Dennis said this was a dumb idea. Outvoted, he went along with it anyways. Before the man separated from us I had him tell me what story Melissa had told him about her and the little girl. I couldn't believe what he was telling me. If this was Melissa's true story... We needed to hurry and find Evie.
at 7:37 PM