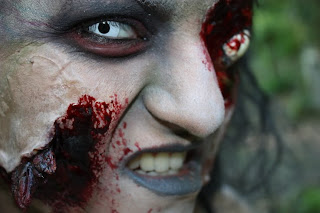 The man's name was Brian and his brother had been James. When Melissa had shown up on their scene they had been surviving quite well. They hadn't seen many zombies and they had managed to gather enough provisions to last them a while. Plus they had found a fresh water stream. They thought they just might be able to live and see the day when shit got back to normal. Then Mel showed up with that cute little girl.

One of their rules had been to not trust anyone but the rule didn't apply to mothers with small children. They helped her out immediately. She had seemed nice and James even mentioned to his brother that he thought she was stunning. He always did have a thing for brunettes.

She told them that she used to have another daughter. Her other daughter had perished in a fire when the church, she was suppose to be safe in, caught fire. There was nothing Mel could have done. The doors were barricaded from the inside. She could only stand and watch as the small church went up in smoke. There wasn't a single scream from inside though. The infected don't scream when they burn. After the Melissa took her younger daughter and fled into the woods.

I listened to the story. It was very similar to the story Mel had told us when we first met her. As Brian walked away from us I tried to piece the two stories together. Maybe I could figure out the true story. Try as I might, I couldn't make heads or tails of Melissa's lies. How could anyone be so ruthless in a world where the few surviving humans needed to stick together. None of the tortures I could imagine seemed worthy enough to punish Melissa for her heinous acts against the living.

Brian whistled twice and then once. He had spotted something further ahead of us. The pattern of his whistling indicated that he had spotted Melissa and my little Evie. I walked straight towards Brian, almost running. While Dennis and Alex fanned out on either side. She would be expecting to see me and even Alex but she didn't know that we also had a trained soldier with us, Dennis. We all knew her prowess with a sword and had seen her in battle. The only way we had any chance of taking her down was by surprise. Otherwise she was liable to have all of our pretty heads sliced up on the ground.

As I walked up next to Brian Evie saw me from behind Mel who was pointing her sword in our direction.

"MA-MA!" Evie started to get up from where she had been sitting behind Mel. I put my finger up to my lips, hoping she would remember the game her grandmother and I had taught her. She did. My little Evie instantly got down on all fours and crawled under a nearby bush at the base of a tree. Melissa searched the ground and a moment of panic set in. Evie was so well hidden that if I hadn't seen where she had gone I would never have know she was there. Alex ran at Melissa from her left side. She turned her head and as she did she was tackled form the opposite side by Dennis. He had her pinned on the ground and disarmed in lightening speed. I ran to the bushes where Evie was hiding and got her to come out. Her hair still had that wonderful baby shampoo smell and her smile made my heart melt. I had my baby girl back. My little Evie was in my arms and tears of joy flowed down my cheeks. Alex joined us and hugged us so hard I almost couldn't breath.

Dennis tied Melissa's hands together with some nylon rope he had brought with him. Then he tied her, sitting down, with her back to a tree. Alex and I watched as Brian took a few hard swings at her face. I had never seen a man strike a woman like that before, except in movies. If this wasn't the woman who had just kidnapped my daughter I would have stopped him, but I didn't care. She deserved worse than that. Dennis asked what we wanted to do with her. Alex suggested we kill her and I suggested we feed her to the undead. Brian had other plans. He asked Dennis if he was okay with torture. Dennis said he wanted no parts of it. Brian then asked him how he felt about capital punishment. Dennis then said that it depended on the severity of the crime.

Whatever was going to happen to Melissa I didn't want Evie to witness. I handed Evie to Alex and cautiously approached Mel. Her face was bloody and swollen from being punched. She looked up at me and I spit in her face.

"You fucking crazy bitch! I hope you go someplace even worse then where the undead rest." I stood back up and took one last look at her before turning to Brian. " Whatever you're planning on doing...make it ten times worse..." Alex and I walked away from the scene. We could hear Brian and Dennis chatting a bit and then a few faint moans from Melissa.

We waited back in the clearing for Dennis to come back to us. The sun was just beginning it's decent from the sky. The clouds reflected beautiful shades of purple, orange and pink. Off in the distance there came a blood curdling scream, another and then another. A small flock of birds rose up from the distant trees and time stood still for a moment. The screaming stopped. We remained crouched down in the dry, crisp tall grass until we saw Dennis jogging towards us.

We walked very fast back into the woods towards home. I forgot the rule of no speaking and tried to get Dennis to tell me what had happened. He just put his hand up and waved me off while saying "later" and "don't worry you got your revenge". I couldn't believe the speed at which we were traveling through these woods at night. It was as though Dennis had a yellow brick road that he was following without any trouble.The way he new his way through the woods baffled me. We saw a few shambling shadows and avoided them. Only once did we have to kill a zombie because he was directly in our way. It looked like it had shards of glass stuck in it's face. My guess was that it must have broke through a window or out of a car. Otherwise we speed walked almost all the way home. We paused briefly when we came to our practice shooting range.

This pit stop made Alex's eyes swell up with tears. This was the last place he had spent most of the final moments he would ever have with his mother. This was where Doris had taught us to use her small revolver. The same revolver Don had used to send her to see the angels. Now, Alex was the one trying to get Dennis to tell him what had become of Melissa. Again, Dennis just said "later" and "let's keep moving, we're almost back to your house."

When we stepped into the house Evie was asleep. We laid her down on the small lamb skin rug in the den and I sat down next to her. Alex sat down on the other side of her. We all stared down at Evie as she peacefully slept. An image of the nativity scene and the three kings came to mind and I smiled.
at 9:14 PM