Part 33 - What will you be wearing when they attack? 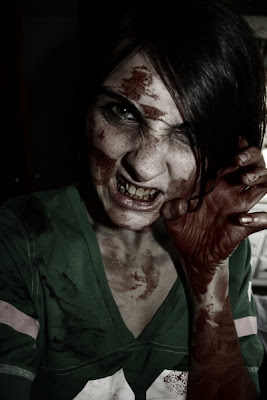 IMAGE BY KIM K. from LostZombies.com

Chris and Dennis were not only telling us that there were other survivors but that some of these survivors might hold the secret to a cure, vaccination or immunity to turning into a zombie. I couldn't believe my ears. I kept interrupting with a million questions until Don grabbed my arm and made me shut up, so they could finish what they had to say.

Chris continued telling us how they got out of the diner and back to the house, alive...

Chris and Grace waited until they heard the whistle signal from Dennis indicating he was in position on the side of the diner and that the back was clear. Chris slowly unlatched one of the glass doors to the Dixie Diner and quietly pushed the door open. Grace stepped out first before Chris could stop her. She went running at the zombie who had once been a prominent black doctor in the community. He had won several awards for his community charity work and excellence in his field. Now he had a nine iron cracking through the left side of his neck. Grace got her golf club wedged through to where is adam's apple should have been and pulled forward. Drug dealers used to use a similar technique, it was called a columbian necktie, they would slit open a man's throat and pull his tongue through the hole. Instead, Grace pulled her golf club forward and pulled part of the zombie's spine through the hole. It came through with a jolt and a splat as part of the upper limit of the epidural space swung out. (This is the space which is the point where the spine meets the base of the skull.) Her club came free as the zombie's head flopped back. The back of his head now rested on the upper part of his back between his shoulder blades with his jaw still chewing at thin air. He continued to charge in the direction he thought Grace was standing. She moved aside with no problem.

Behind Grace the woman in the Who tee shirt stubbled towards her, dragging her broken foot, slowing her down considerably. Dennis wasted no time, as soon as he saw Grace fly into action and went after the woman zombie with his jagged edged lead pipe. He struck her in the side of the head and she fell to the ground with a thud. She rolled on her side and seemed to try to growl or scream or something. Instead it just sounded like someone trying to moan while gargling a mouth full of coagulated blood. She tilted her head, where her lower jaw should have been, up towards Dennis and raised her hands. He stabbed through the top of her mouth, through her teeth, straight into her skull and out through the back. The lead pipe made a bone crushing, moist brain cutting, hard hitting noise on the way in. The zombie woman's body went limp as soon as Dennis withdrew his pipe. A reasonable chunk of her brain was still lodged in the hollow part of the pipe. He shook it and the dark pieces of rotton, bloody, dangerous, disgusting zombie brains slid out onto the ground.

Chris finished the doctor. He simply kicked him in the back forcing him to fall on his chest. His almost severed head rolled off his back and onto the ground. The loose fatty tissue, small arteries, and a network of large, thin walled blood vessels were now twisted and barely holding the dead man's head to his body. Chris brought his bat down hard. He swung and swung until the zombie's skull split open like a pinata.

Dennis, Chris and Grace looked around for anymore attackers and then smiled at each other. That wasn't so hard. It's a lot easier when the good guys out number the zombies. Ya know.

They all turned towards a sudden, fast crunching noise of someone running at them. It was frank and he was pissed. He swung the metal sledgehammer fast and clipped the side of Dennis's head. Luckily he didn't make full contact or Dennis would not have lived to tell the tale. Normally, a sledgehammer would be hard to swing around, let alone use as a weapon. But Frank had so much adrenaline and hate flowing through his veins he was like a made man with the power of ten.

Chris stepped forward and caught Frank in the back of his knees. Frank fell to the ground yet managed to swing the hammer again and drop Chris to the ground next to him. Just inches from his face, Chris couldn't resist getting revenge for what Frank had made him endure. He opened his mouth wide and bit down into the fleshy part of Frank's cheek. He tore a solid piece of meat rom his face while Frank howled in pain. Every member of the undead within half a mile heard him like a dinner bell.

Dennis did his best to shake off the pain and the ringing in his ear. His eyes came back into focus in time to see Chris eating Frank's face. His brain scrambled. Had Chris turned into a flesh eater and how did he turn that fast. Just when Dennis thought he was going to have to kill his friend he saw Chris spit out his very untasty treat.

Grace searched the tree line around the diner a little too late. Her sister lunged at her from behind and sank her half broken teeth into the round part of her shoulder. Grace screamed and rang the second dinner bell. Grace yanked her sister off by her hair. Her sister got slightly tossed away while most of her hair stayed in Grace's hand. Along with rotting parts of her scalp. Grace's sister was still wearing her favorite green and white jersey. The same jersey she had on the day the first wave of zombies showed up   in their small town. The same jersey she wore while they ran for their lives, hid under cars, met other survivors only to watch them being eaten by people who were once human. Her name used to be Lilliane and now she wanted to eat Grace.

Chris stood up quickly and knocked out most of Frank's front teeth. There was a loud crack as Frank's jaw shattered. Followed by a second loud crack as Grace made contact between her sister's skull and her golf club, now badly bent. Grace began to cry softly under her breath while she got her little sister's brains to spill out on the ground. Through the tears in her eyes she looked over at Chris. He was almost in mid swing to take off the rest of Frank's head when Grace yelled out.

Chris looked up at Grace running his way and Dennis was busy looking at something else. Shapes shambling in the distance towards them. Lots of shapes. The undead were hungry and ready for their dinner.

"Um, Chris...I think we need to get the fuck out of here...NOW!" Dennis backed up and pointed ahead down the road and then towards the trees.

Grace fell to the ground next to Frank and held his head. Blood was gushing from his nose and he looked barely conscious. She brought his face to hers and stared him in the eyes.

Chris tried to grab Grace away from Frank but she wouldn't let go of his face. She pleaded with Frank to tell her where her son was. It seemed like he tried to say something but his jaw just clicked. Dennis helped Chris and they tore her off of Frank. They got a few feet away and Grace broke free running back towards Frank and the hungry zombies who were now closing in. Luckily none of these guys were fast. Most looked like they had been dead since the beginning or almost as long. Some were nothing more than rotting skeletons barely held together.

Grace tried to get Frank to talk one last time. To tell her where her son was and if he was even alive. Right before she was dragged away she heard Frank say "He's still alive but you can ....go fuck yourself". Grace felt a ping of hope and sudden pit in her stomach. Her son was alive but would she ever find him. This was almost worse than hearing he was already dead. Dennis threw her over his shoulder and they ran towards the tree line that had the least amount of movement. She looked back and watched as the flesh eaters swarmed in on Frank and tore him limb from limb. Sinking their teeth, fingernails and bones into him. Ripping out his bowels and sucking on his intestines.
at 8:26 PM