THE HUNGER: another step on your virtual zombie walk 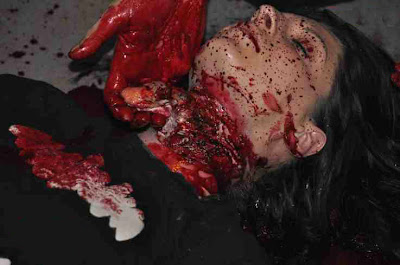 IMAGE By MARTIN from Germany.

The hospitals filled up fast and the surrounding tents outside of the hospitals filled up even quicker. It was a new strand of hemorrhagic fever and it didn't just stop at death. The bodies of the dead were coming back to "life" and feeding on the living. At first it was just a few patients. Not all of the dead re-animated. This meant that the infection was evolving and mutating. It was figuring out how to spread itself even after it's host had long since passed away.


The first patient to re-animate was a man who had bled out of his eyes and his anus during the night. A nurse came to check on him in the morning. He bit a hole in her throat and ate out her tongue. When they found him he was drinking her blood and eating more of the fleshy part of her throat. The doctors restrained him and began running tests. They were able to establish a few things before patient number two came back from flatlining and ate the patient in the bed next to hers.


It seemed that this new hemorrhagic fever was being caused by a virus and a bacterial infection all at once. The virus would cause a severe rash and bleeding. It would attack the immune system and pave the way for the following bacterial infection to set up shop in the brain, spinal fluid and in muscle tissue. Patients would "die" from the virus but come back from the dead because of the bacteria rapidly reproducing in their bodies. The word die is in quotes because the victims weren't really dead. They had a pulse, heartbeat and could attack but they were in other respects dead. They showed very little brain activity, were unable to speak or understand anything and their bodies seemed to start to decay.


Some of the doctors attributed the decay of the victims bodies to the bacteria and how it was attacking red and white blood cells. The next thing the doctors tried to figure out was why these "zombies", for lack of a better word, were attempting and succeeding at eating the living.


Their theory on this was that somehow the immune system of the "undead" was still active and attempting to rid itself of the bacteria by ingesting iron (found in human blood). Iron may be a limiting factor in the growth of bacteria. Every living person has a certain amount of free iron in their bodies. Their other theory was that the bacteria was controlling it's host and forcing it to attack the living so that it could spread itself. Like a rabid dog biting and infecting new hosts.


All of these theories are just that ....theories. Nobody knows for certain. But one thing is for sure...if this new strand of hemorrhagic fever isn't contained we will all be facing zombie hordes very soon.


TO CONTINUE YOUR ZOMBIE WALK FOLLOW THESE LINKS BELOW: 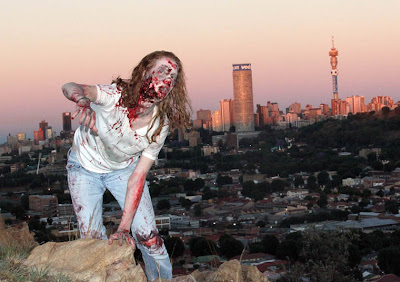 
Chris and Dennis finished their story by telling us that Grace had left them. She said that they shouldn’t worry about her because she was immune to the zombie infection. There was something in her blood that made her heal incredibly fast and, although she had been bitten multiple times, she had never crossed over to the undead side. Grace hoped her son had the same sort of immunity. She assumed that he did since Frank had said he was still alive. That was the only reason Frank had been keeping her alive.


Frank had placed her in one of his twisted and demented undead torture positions with an incredibly dead man. Half of the skin on the man’s face was missing, exposing half of a very toothy grin. He smelled of rotting flesh and feces. This zombie man was nothing more than a torso rigged up to a pulley hanging from the ceiling. Grace had been bitten several times on her side and buttocks as Frank would lower and raise the zombie on top of her.


After the first night of this excruciating torture she had been left alone. Frank was stupefied and horrified that she didn’t have a single bite on her in the morning. She was covered in her own dried blood but there wasn’t a puncture mark to be found. Frank repeated this torture for five nights straight, always with the same result.


“Angels on the sideline,
Puzzled and amused.
Why did Father give these humans free will?
Now they're all confused.”


After the five nights of hell Frank transferred her to the basement where Dennis met her tied to a metal drum. Frank would go down into the basement to “visit” her. He would bite her, beat her and drink her blood. He hoped that her immunity and special gift of healing would somehow get transferred to him. It never did.


Grace would always know when Frank found new victims. She would hear the footsteps above her. Unable to scream for help because she was either gagged or too beaten to muster a sound or move. Then Grace would smell the pancakes cooking and the sounds of people having a leisurely chat. Exactly the same scenario and routine as when she had first walked into Frank’s house of horrors with her sister and son.


“Don't these talking monkeys know that
Eden has enough to go around?
Plenty in this holy garden, silly monkeys,
Where there's one you're bound to divide it.
Right in two.”


Grace had chosen to leave Dennis and Chris before coming to the house. She said that if she found her son she would come to the house and maybe her son and Evie could have a play date as the last two living children on earth.


I couldn’t imagine losing my little Evie. I think I would willingly throw my life to the zombies if i ever did. Let me stop thinking about it...
Now there were the six of us left in the house. We had enough food to last us for another five to six days and we had been lucky collecting rain water.


The overall vibe in the house was good. I was even getting along with Alex better than we had before. Evie was learning new words and repeating everything that was said. One afternoon she repeated the word “fuck” and I told her not to say that cause it was a bad word. Alex gave me a funny look and asked what it would hurt for her to say it. It’s not like we would be putting her in preschool where she might accidentally teach it to other children. Besides, Evie might end up being the last person on earth. In which case she should know every word possible whether they were good or bad.


I cried that night.


The weather is beginning to change and I think summer is officially over. I say that I think that because I’m a few days off of keeping up with the calendar. It was a little something to help me feel like the world hadn’t completely gone off it’s axis. But let’s face it. It has.


The banker is eating the poor. A woman is eating her young. Yet the living can’t find a meal. Governments have collapsed and the value of money is equivalent to that of toilet paper. I’d actually prefer to have toilet paper. Petty arguments about what to have for dinner have been replaced with lengthy discussions about how to find dinner. I used to watch horror movies for fun and now I’m living through one.


We have been talking about building a larger fence around the front of the property. It’s just talk for now because even though a larger fence might keep out more zombies it’s a huge risk. It’s a risk while we are building it with the amount of noise we might make and it’s an even bigger risk for the unwanted attention we might get from the wrong type of survivors.

That's a pretty lucky shot. I don't think most people could throw a rock and hit a zombie in the head, let alone with enough force to knock it down. Although, most zombies don't have the best balance. I imagine baseball pitchers could do a ton of damage to an oncoming zombie horde with a bag of rocks. :0)
at 2:44 PM No comments:

(CBS News)  Halloween is still more than one month away but archeologists working in Ireland have uncovered a couple of 8th century human skeletons that point to a ghoulish story.
The skeletons, dug up between 2005 and 2009 at Kilteasheen, near Loch Key in Ireland, were found with stones stuck into their mouths. Researchers examining the remains suggest this may have been related to a belief among the locals that this practice would prevent the dead from returning to walk the Earth as zombies.
What began as a survey of medieval churches in Co. Roscommon, Ireland, has since turned into one of Ireland's largest research excavations. Indeed, the project has so far turned up more than 120 skeletons in a cemetery which dates between the 7th and 14th centuries. The site has revealed traces from the Neolithic, Bronze Age, Early and later Medieval eras.
Chris Read from the Institute of Technology in Sligo, Ireland, said that one of the skeletons - both were men of indeterminate age - had a large black stone deliberately shoved into his mouth. "The other had his head turned to the side and had an even larger stone wedged quite violently into his mouth so that his jaws were almost dislocated," Read told Discovery News. He added that the stones might have acted as a barrier to prevent revenants or the "walking dead from returning from their graves.
Click here to read the story on Discovery News. You can also get a sense of the terrain and the excavations from this 2009 video posted on YouTube
at 8:19 PM No comments:

QUARANTINE 2: zombies on a plane!