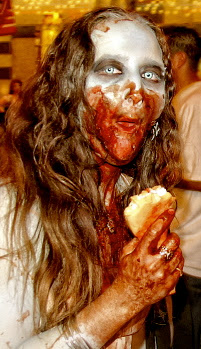 Dennis slowly opened his eyes. He tried to focus in the darkness but all he can focus on is more darkness. Something woke him, something is moving just beyond him and it isn't the woman tied up across the way. He can feel the movement in the air and someone is whispering. Suddenly he feels hands on his legs and hands on his shoulders. Something moves precariously close to Dennis's head and his first thought is "this is the end". Dennis awaits the feeling of being bit into, of having skin and muscle torn from his bones. The ultimate feeling of helplessness as his life is eaten away from him. He wished he hadn't joined the military and had married his childhood sweetheart in a romantic moment. But then he probably would have to had to live the horror of watching them torn to shreds by a pack of hungry undead. Watch his beloved have her hair torn out and arms devoured by the neighbor and his son's back torn apart and open like a rack of baby back ribs. All this while he fought to defend his own life defenseless to help his family. Dennis closed his eyes tight waiting for the first bite.

But the first bite never comes. Instead he feels a heavy, warm breath.

"It's me...let's go" Chris's voice is a happy sound for sore ears. the hands on his legs are comforting and pleasant, must be the woman...

Dennis feels his wrists go free and he draws his hands in front of him. Nobody speaks and Chris guides him to stand up. They slowly walk up the stairs in the pitch darkness. Chris leading the way and Dennis following up at the end.

"Ok, Frank went out and I managed to get free. All of the doors are locked from the inside except for one door I found but we have to walk though... well... just follow me, stay close..."

Chris opens the basement door and Dennis is temporarily blinded by the light. It feels like ages since he saw light. Eyes re-focus. Welcome back to the happy golden yellow kitchen. It now looks less happy, though, and more like a movie set. The color makes Dennis want to puke and everything looks staged. The maple syrup bottle on the table has a sticker on it that says "Organic from Maine" and shows a snowing forest scene.

Dennis and the woman follow Chris through the makeshift kitchen, through a small hallway with empty picture frames and into the pantry. The back of the pantry swings open and the smell of decay burns their nostrils. Tears begin to form as they are thrown into hell.

A hand swings by Dennis's foot and he barely avoids it. Low amber lights illuminate a tight path and blood coats the floor, walls and ceiling. The hand returns to what it's doing and Dennis looks over. a young woman is strapped to the wall tightly and a zombie, the same zombie who just swiped at him returns to the meal of her left calf. you can tell she's still alive as tears flow down her cheeks like a river. the zombie continuously sinks his front teeth into her leg drawing out flesh and pain. The zombie is also chained up unable to go farther than his meal. The next scene Dennis walks by isn't that much different except it's a man chained to the wall with his legs spread. A vicious head is busy eating away at his inner thigh, just inches from his family jewels. It sounds like a fat man sucking the bones of a T-bone steak with a slurpy tongue. The man is unable to scream because his mouth is gagged with a ball and leather strap. Somebody thought about his position in depth.

the next unfortunate victim is unable to scream or move. Her head looks like a dinner plate of sloppy Joe as the zombie chained behind her shovels fist fulls of her brains into his mouth. Dennis paused a moment to watch. slowly the girl's eyes widen, she couldn't be older than fourteen. Her jaw begins to jar. Her eyes begin to move and the zombie behind her stops eating. Dennis wonders how the other zombie knows to stop eating. Zombies are dead cannibals yet they won't eat each other. The woman from the basement tugs on Dennis's arm and he moves forward. His feet slosh through a pool of vomit. The next two scenes disturb Dennis to his core.

Two women are chained up in a precariously weird balance. The first is biting into the others legs and the other woman is biting into her attackers back, teeth first. Both seem to have had their hand severed and bandaged. They are both alive, in the sense that they aren't zombies and yet both appear completely dead. The final scene is of nothing that should exist, not even in hell.

A man, only partially bound, has a knife and is slicing hunks of dead flesh off of a fully bound zombie. He is filleting rotten meat off of the zombie's rib cage in the same fashion a person might slice meat off of a Gyro round of meat. Slowly chewing and ingesting each slice like it was fillet Mignon in the best steak house.

The answers lie with Frank.

Chris swings open the only unlocked door in the house at the end of this path of carnage. Chris, the woman and Dennis step out into the light of a fading day. The fresh air is sweet and the feeling of victory. Dennis gets his first real look at Chris. he has multiple bit wounds on his neck and face and his leg is badly burned.

The three of them run like there's no tomorrow. Far off in the distance behind them they hear an angry scream...