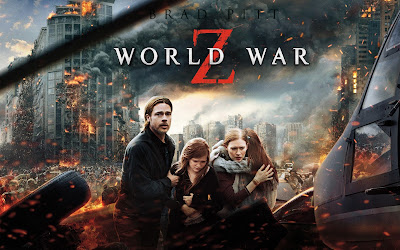 So, by now, I'm sure most of you have gone to see the movie World War Z starring Brad Pitt. Well, what did you think?

I thought it was a fun, hollywood movie with zero character development, lots of action, unrealistic depictions of infected people (not zombies!) and the movie failed to create a world that adhered to it's own rules.

If you haven't seen the movie don't read past this point. There may be spoilers ahead!

Let me start of by saying that I have absolutely zero idea why Brad Pitt's production company bought the rights to the book World War Z by Max Brooks. Other than to capitalize on the best-selling book's name, and name alone.

This is not a zombie movie. It is a movie about the infected. The same way 28 days later is a movie about the infected. Zombies are formed when humans return from the dead with a need to eat and consume other living humans (and animals sometimes). The infected are created when humans are exposed to a virus or bacteria which transforms the human body into an instrument that the virus or bacteria can use to spread itself through bodily fluids and biting.

For example, in the movie World War Z the infected can smell when another living human is sick with a terminal disease and won't attack them. Yet the infected can't seem to smell a healthy human less than 3 feet away from them through an open door on the other side of a wall. Weird...

Also, it really bothered me that the infected in the movie act like a tsunami or a wave of hungry ants. They also seem to possess super-human abilities and can jump like spiders! Infected humans or zombies should not be created by computers! That's one reason I really enjoyed the remake of Dawn of the Dead in 2003. The director used real amputees and people with makeup for the zombies, thus creating "believable" zombies.

Finally, World War Z should not have been called World War Z! World War Z is an epic book that I recommend everyone, zombie fans and non-fans alike, should read. I have asked many people who have seen the movie if they like dit or not. Funny thing is, those who had read the book were very disappointed with the movie but said it was entertaining. Those who had not read the book and had only viewed the movie thought it was "GREAT!.

So in conclusion, it's disappointing that Brad Pitt didn't make the movie that most of us were waiting for with great anticipation but it's always fun to watch another "zombie" movie.
at 12:07 PM No comments:

You won't hear this on TV: Biological Hazard

This is the first posting of the new series "You won't hear this on TV" here on Zombies Can't Love.

I will be bringing you simple reports of events going on throughout the world which are not being reported on in the mass media. Things I find bizarre, interesting, weird or important.

This is the website where I am obtaining this information from : http://hisz.rsoe.hu/alertmap/index2.php?lang=

Feel free to check the website out for yourself... 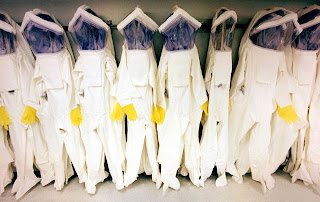 Authorities say they still haven’t determined what caused six U.S. border agents to require decontamination and medical attention after inspecting a vehicle at a crossing in northern New York. Customs and Border Protection officials say two officers were examining a 2002 BMW around 6 a.m. Saturday at the Champlain crossing when they began to feel ill. Four other officers who went to help them didn’t become sick. State and local hazardous materials teams responded. Officials say all six officers were decontaminated on site and taken to the hospital in Plattsburgh. They were later released. Clinton County emergency services officials say Monday they still don’t know what caused the two officers to become ill. State police say a New Hampshire man who was driving the car faces minor marijuana and methamphetamine possession charges.

Biohazard description: Viruses and bacteria that cause severe to fatal disease in humans, and for which vaccines or other treatments are not available, such as Bolivian and Argentine hemorrhagic fevers, H5N1(bird flu), Dengue hemorrhagic fever, Marburg virus, Ebola virus, hantaviruses, Lassa fever, Crimean-Congo hemorrhagic fever, and other hemorrhagic or unidentified diseases. When dealing with biological hazards at this level the use of a Hazmat suit and a self-contained oxygen supply is mandatory. The entrance and exit of a Level Four biolab will contain multiple showers, a vacuum room, an ultraviolet light room, autonomous detection system, and other safety precautions designed to destroy all traces of the biohazard. Multiple airlocks are employed and are electronically secured to prevent both doors opening at the same time. All air and water service going to and coming from a Biosafety Level 4 (P4) lab will undergo similar decontamination procedures to eliminate the possibility of an accidental release.