Real Zombies May be Linked to a New Drug 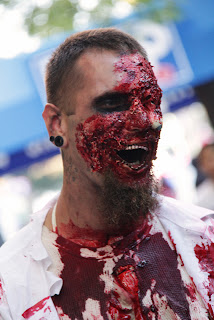 Real Zombies May be Linked to New Drug

This picture was taken at a fun event in New York City last year, a Zombie Crawl. Where people dress up like zombies to go out for drinks and fun. Well, now it seems as though there may be a new drug on the market that is actually turning people into deranged, dangerous and vicious "zombies".

In Miami, Florida a young man was seen chewing the nose, eyelids, cheeks and skin off of another man in broad daylight. The first officer on the scene ordered the naked attacker to back away from the badly bleeding victim and he just growled. Even after being shot the attacker didn't stop eating the other naked man's face. Witnesses in the area said they heard at least six shots in all. What kind of person doesn't stop eating another man even after they have been shot?

In Hackensack, NJ a 43 year old man  barricaded himself in a room while threatening to harm himself. When police finally kicked down the door the man began stabbing himself with a knife in the abdomen, legs and neck. The officers tried using pepper spray to get the man to stop stabbing himself. This had zero effect as the man then took pieces of his intestines and skin and threw them at the police. A swat team had to be called in to restrain the man.

A swat team for one man!

On the CBS Miami website I found an article that now, possibly, links the Miami attack to a new drug that has lead to similar incidents. Emergency room doctors in Florida have said that they have seen an increase in bizarre, biting incidents linked to a drug called "bath salts" or " the new LSD".

This "new LSD" is said to cause a person's temperature to rise to an extremely high level and to become extremely aggressive. Some use their teeth and jaws as weapons and the person is in a state of delirium. Unlike the LSD taken in the mid-sixties this "new LSD" is a stimulant. This means that it is a psychoactive drug which may induce temporary improvement in either mental or physical function or both. It may also diminish the need for food and sleep.

"They were “Extremely strong, I took care of a 150 pound individual who you would have thought he was 250 pounds,” Dr. Adams said. “It took six security officers to restrain the individual.” - CBS MIAMI


I don't know about you but this to me sounds like real-deal "zombies". They aren't infected or the dead rising back to life. But they sound crazy, fast and have to reaction to extreme levels of pain... Stay alert my friends and readers, drugs don't know borders, classes, bounds or restraints. I will be keeping up with whatever else I hear about this new drug.

This is a full length movie for you to check out. I want to know what you think instead of just giving you guys my review...I'll tell you what I think later.

"'Zomblies' from the team here at Realm Pictures.
The official low-budget UK action b-movie, free at last to watch online.Produced for just £10,000 with a total of 200 volunteers in the South West of the UK, this is micro-budget action filmmaking at it's best!"Bloody Fantastic, beautifully shot, truly suspenseful - and great zombies!"Sir Richard Taylor, head of WETA Workshops, NZWhen a private militia's rookie zombie hunters send out a distress call, it's up to the Rangers to cross The Wall and bring them back as well as uncover the truth about a terrifying new breed of zombie."

PLEASE LEAVE ME COMMENTS ON WHAT YOU THINK!! THANKS AND ENJOY!!
at 5:40 PM No comments:

Im off to infect some protestors. 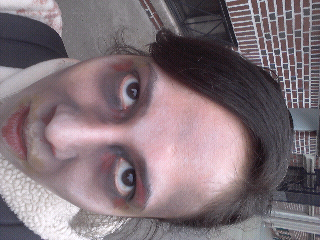