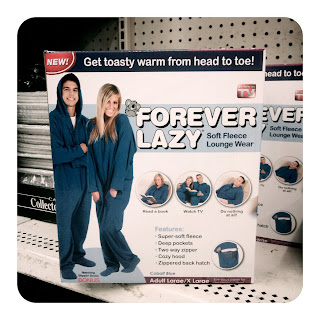 "Get toasty warm from head to toe!" - that way you'll taste just perfect when your neighbor takes a huge bite out of your upper thigh. He won't be able to get a really good bite because blue fleece will be in his way but he will be able to grab hold of you really well as he tries again. If only you hadn't been "forever lazy" and practiced some cardio once in a while. You might have been able to outrun his 76 year old zombie ass.
__________________________________

This was just one of the many useless items you could find on retail shelves before the undead began to roam the land. The name even describes most people’s state of mind before the undead outbreak - “Forever Lazy”. I would’t be surprised if there weren’t products called “Forever In Denial ” and “ Forever Mindlessly Entertained” somewhere out there.

It’s funny to think that the people who lounged around in these Forever Lazy ensembles are now busier than ever. Walking around relentlessly in search of a living meal. These, now dead, people are doing more cardio then ever and not complaining about it at all. They just moan or try to moan whenever a living mammal is within sight or earshot.

I would also like to note that this product doesn’t come in x-small or small. At least I couldn’t find any in that size at the store. All that was available was large and extra-large. When the zombies showed up it was like some cosmic force had asked the zombies if they would like to super-size their meals and wrap them in fleece!